The ban on electric fishing was so fatal to the Dutch lobby, on the verge of collapsing,[1] that it works tirelessly at the European level to have the ban lifted. The situation, as tedious as it gets, could be comical if not dangerous… The strategy of the Dutch electric fishing lobby — repeating the same lies over and over again — is indeed well known and used.[2] Unfortunately, this strategy has harmful impacts on democracy and the confidence that citizens have in their institutions, as evidenced across the Atlantic.

The latest Dutch gesticulation to date is the debate of 16 November 2020 held in the European Parliament’s Committee on Fisheries. It was held on the initiative of Dutch MEP Peter van Dalen, Vice-President of the same Committee. Nothing new on the horizon, but that did not prevent this Dutch MEP from claiming victory following the debate, by announcing the possible come back of electric fishing in European waters in 2021.

The subject of this home-made fuss is a Special Advice from the International Council for the Exploration of the Sea (ICES), which was published in May 2020 in response to a question from the Netherlands.[3] They asked ICES to compare the impacts of electric fishing with those of regular beam trawling, a method that is widely condemned at the global level and considered to be one of the most destructive ones. Did the Netherlands ask for a comparison with the lowest-impact fishing methods? No, of course not, because that would have been embarrassing, to say the least: such a comparison was done in 2012 by Dutch researchers, but was subsequently abandoned because electric fishing scored very poorly compared to other methods such as the nets used by small-scale fishers in the North of France![4]

At the request of Dutch MEPs in favour of electric fishing, Dr. Mark Dickey-Collas, President of ICES’s Advisory Council — who became a Dutch citizen in September 2019,[5] but who was also the head fisheries advisor to the Dutch government and a former researcher at the Dutch research institute IMARES/Wageningen U&R — was called to take the stand and present this Special Advice commissioned by the Dutch. The aforementioned Dutch institute, at the forefront of ‘research’ on electric fishing, produced most of the analyses used to formulate the ICES Special Advice; an institute largely funded by the Dutch electric fishing lobby. In 2019, we had in fact demonstrated that 100% of the European funds allocated to ‘research’ on electric fishing by the Netherlands had always first transited through one of the representatives of electric fishing (VisNed, Nederlandse Vissersbond etc.). 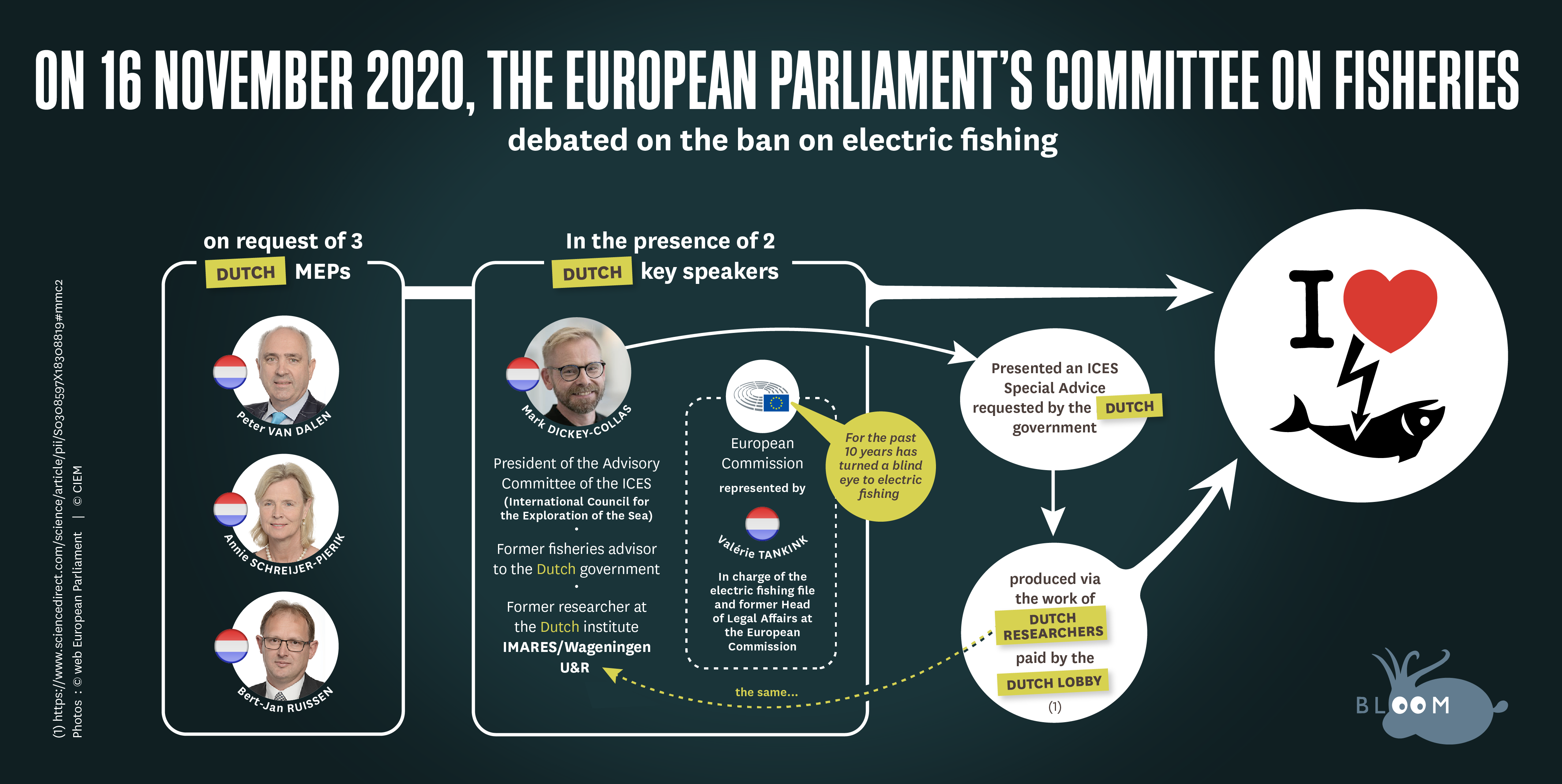 In short: a Dutchman presented a report commissioned by the Dutch and written on the basis of Dutch research funded by those, Dutch, whom this research is supposed to judge… The outright manipulation of an all-powerful and untouchable lobby, in order to satisfy the financial interests of the cynical industrials it represents.

The presence of Valérie Tankink — also Dutch , former head of the European Commission’s legal service and now in charge of the electric fishing file — as a speaker should also be noted. Although she tiptoed with great professionalism, she nevertheless gave us some hope regarding a potential legal action against the Netherlands (see below). Unbelievable! It is indeed high time that the European Commission finally took the measure of the scandal that this dossier represents, as its behaviour — condoning the Netherlands’ illegal practices for years — is unacceptable and has damaged the trust that citizens and many MEPs have in it.

Misguided science at the service of those lobbies who finance it

As mentioned above, the ‘science’ on which this ICES Special Advice is based is biased at its source, because the questions are asked by industrials with vested interests, who then fund researchers to answer them. Two years ago, when the exact same question was already asked, the Special Advice at the time had called for strong criticism from Ifremer, even though this institute usually dislikes publicly criticising its colleagues. History repeats itself like music that goes round and round in order to cast doubt on the validity of the electric fishing ban. This strategy of disinformation, visible in all sectors, is classical and can sometimes be victorious. In this deleterious process, institutions such as the ICES, but also the European Commission and Parliament, lose credibility and risk undermining democracy in Europe, which has already been badly damaged by the rise of extremes and the growing mistrust of citizens in their political decision-makers.

Regarding the instrumentalisation of science, the Dutch are not at their trial run. During our campaign against electric fishing, BLOOM revealed the web of lies that surrounds this file, starting with the European Commission wrongfully claiming in 2006 that it had the agreement of the Scientific, Technical and Economic Committee for Fisheries (STECF) to issue the first derogations for electric fishing, which was banned in 1998. Two further sets of derogations allowing more vessels to be equipped were subsequently justified by the need for scientific research.[6] However, this research never took place until 2018, when the electric fishing lobby’s dream of expansion was shattered by our revelations. This fraud, already brought to light by ICES,[7] was confirmed by the Dutch Minister Carola Schouten’s herself, following the investigation of a journalist from the Dutch newspaper NOS in 2018.

Since then, the Dutch research institute has been running at full speed, botching research watered down with funding and data from industry. This research should have been carried out by an international consortium before the very first exemption was granted. How much credit should be given to this rushed ‘research’? Absolutely none, let’s not be duped.

No political repercussion but heavy social and environmental consequences

As Caroline Roose, Member of Parliament, rightly pointed out in her address to Valérie Tankink, the representative of the European Commission at the debate, the real, persistent problem is that of fraud: “this Advice wants to distract us from the real issue, the fact that the Dutch government does not comply with the European legislation“. In response, Tankink modestly admitted that the Commission was investigating the matter and that it would not hesitate to use the tools at its disposal to better enforce the regulation. A touch of hope for us, but still very weak in view of the European Commission’s actions for the past three years (we filed our first complaint against the Netherlands in October 2017).[8]

Unfortunately, this fraud continues with impunity — not to mention the illegal practices of many electric trawlers —[9] with serious consequences for small-scale fishers in the North Sea. Dunkirk’s fish auction closed its doors for good on 22 October 2020 because catches of sole, a species targeted in the same area by both French gillnetters and Dutch electric trawlers, have become insufficient to maintain its profitability. MEP Pierre Karleskind, Chairman of the Committee on Fisheries, asked a pertinent question to ICES on this matter, but was ignored by his interlocutor: “you write in your report that sole is managed in a sustainable manner, please explain why sole is declining in a number of fish auctions? ». Didier Gascuel, professor at the Agro Institute and STECF member, was taken aback by the lack of response from Mark Dickey-Collas and reacted on Twitter: “It is amazing that ICES does not have any answer to this“. There are, however, many elements supporting the ban on electric fishing, including those identified by researchers who have historically been pro-electric fishing. In particular, Hans Polet, a very prolific researcher on electric fishing, commented on an ICES document in a press release which was later deleted (but which we saved here): “[our institute] ILVO has clearly demonstrated that the Belgian 12 nautical mile zone has been fished in an indiscriminate manner by Dutch electric trawlers. Their practices have clearly had a negative impact on fish stocks off the Belgian coast. Moreover, the complaints of Belgian, French and English small-scale fishers, who suffered from unfair competition from electric fishing, were not taken seriously“.

Electric fishing is rightly prohibited, let’s keep it that way

But the conclusion of this debate is yet another failure by Dutch lobbies in their quest. MEPs from all political sides reaffirmed their position in favour of a ban on electric fishing, with the exception of the three Dutch MEPs who support the electric lobby. While the Netherlands feels all-powerful and exempt from complying with the laws, it is up to the European Commission to set them straight and demand compliance with European regulations. The Commission plans to publish a report before summer 2021 on the implementation of the new “Technical Measures” regulation. In the meantime, illegal derogations are still active, and no sanctions against the Netherlands have been taken.

[1] As a reminder, the Netherlands had officially equipped 84 vessels with electric trawls until 1 June 2019, whereas only 15 were regulatory (figures based on the European Fleet Register, available at: https://webgate.ec.europa.eu/fleet-europa/search_en).

New unpublished data, published by BLOOM in September 2020, actually show that this figure was more likely to be close to 100 vessels equipped!

[3] BLOOM analysed and decrypted this advice.

[7] “The issuing of 84 licences to carry out further scientific data collection is not in the spirit of the previous advice and that such a level of expansion is not justified from a scientific perspective. […] This is well in excess of the 5% limit included in the current legislation. At this level this is essentially permitting a commercial fishery under the guise of scientific research” ICES (2015) Second interim report of the working group on electrical trawling (WGELECTRA). IJmuiden, the Netherlands, 10-12 November 2015 Copenhagen (Denmark).

[8] The European Commission has already recognised the illegality of many of the Dutch derogations, without initiating any procedure against them:

– on 1 February 2019, mentioning its intention to open a formal infringement procedure against the Netherlands;

– on 29 July 2020 by confirming that the Netherlands had the right to keep 15 — not 22 (at least) — derogations until 30 June 2021, when the latter derogations will be withdrawn and electric fishing will be completely banned.

[9] Many vessels — including some involved in ‘scientific research’ — have been shown to fish in prohibited areas or with illegal mesh sizes. BLOOM also revealed that electric fishing trawler TH10 regularly but illegally fished within 12 Belgian miles, despite the fact that Belgium banned this technique in its territorial waters in August 2019.