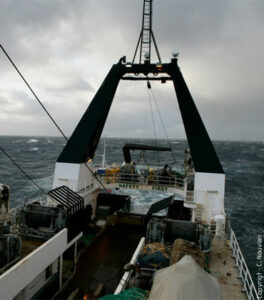 Around 80% of deep-sea fishing in the world is carried out using deep-sea trawls – an extremely destructive fishing method where enormous weighted nets are dragged across the seabed. Deep-sea trawls tear up everything in their path, from the organisms that make up the sea floor to all the species that live there. Fish to be kept for sale are sorted on board, with huge amounts of waste, because on average, half the content of the net is thrown back overboard.

This indiscriminate technique is considered to be the most destructive fishing method in existence today, not only by researchers and NGOs, but also by the UN and the International Council for the Exploration of the Sea (“ICES” is responsible for producing scientific recommendations for managing European fisheries).

In 2004, the United Nations Environment Programme (UNEP) identified deep-sea trawling as the most destructive of all fishing techniques:

“Active gear that comes into contact with the sea floor is considered the greatest threat to cold-water coral reefs and this includes bottom trawls, dredges, bottom-set gill nets, bottom-set longlines, pots and traps. Due to their widespread use, bottom trawls have the largest disruptive impact of any fishing gear on the seabed in general and especially on coral ecosystems.”

A recent study showed that in a single year, deep-sea fishing had a cumulative impact hundreds or thousands of times greater than all other human activities over several years. (Angela R. Benn et al., Human Activities on the Deep Seafloor in the North East Atlantic: An Assessment of Spatial Extent. PLoS One, September 2010 | Volume 5 | Issue 9.)

The origins of deep-sea trawling as a fishing method

Trawling emerged in the 14th century (in France in 1370) and was immediately identified as destructive. In 1376, just six years after it was introduced, trap fishers sent a petition to King Edward III concerning the decline in populations that this new technique was causing, but trawling was not banned.

The steam engine caused an immense growth in trawling: in England, the fleet grew from 130 boats in the 1840s to over 800 in the 1860s. Thousands of fishermen (using lines, nets and traps) were opposed to the rise of trawling, causing outbreaks of unrest in England and Ireland. A Royal Commission was named in 1863, but without scientific expertise, its investigation drew the wrong conclusions: the destructiveness of the method was seen as a mere detail compared to the huge volume of fish caught. The conclusions made no mention of the destruction of the habitat, of juveniles, of bait beds (mussels etc.) and of the discards caused by this fishing method. The commission’s decision was that “total freedom for fishing is permitted”, and a laissez-faire approach was adopted and a historic window of opportunity to protect the world’s oceans was missed. The short-sightedness of this commission is reminiscent of that seen in France, with the process that emerged from the Grenelle Seas Summit: the “Deep-Sea Fisheries Mission” much criticized by NGOs (who resigned from the Deep-Sea Fisheries Mission which they criticized as a corrupt process in favor of the industry).

Deep-sea trawling activities began at the end of the 1970s, at a time when scientific understanding of the deep sea and its fisheries resources was still poor. This was also a period of abundant public aid for fishing fleet modernization and vessel construction. Since this time, the myth of deep-sea stock “sustainability” has been undermined by the exploitation curve of deep-sea species and the overwhelming evidence of the devastating and unprecedented ecological impact of deep-sea fishing on deep-water ecosystems . The “3rd trawling revolution” constitutes the final phase of the expansion of trawling as a fishing method. It is, in some ways, the third and greatest example of a missed historic window of opportunity to prevent the systematic and global destruction of the deep sea and its reduction to a vast, featureless plane.

Deep-sea fishing is an “odious natural debt” from states to the people that they govern, and whose common interests they are meant to represent.

The concept of odious natural debt is an adaptation of Alexander Sack’s “odious debt”. This concept is defined as a debt accumulated by a regime, which serves to finance actions going against the interests of the State’s citizens and about which creditors are aware. These debts are thus considered as belonging to the regime that accumulated them and not to the State as a whole.