In a new study published in the international journal Fisheries Research and co-authored by BLOOM,1 a group of scientists has produced an exhaustive atlas on global tuna fisheries for  the first time.

Lack of accurate public data despite the importance of these fisheries 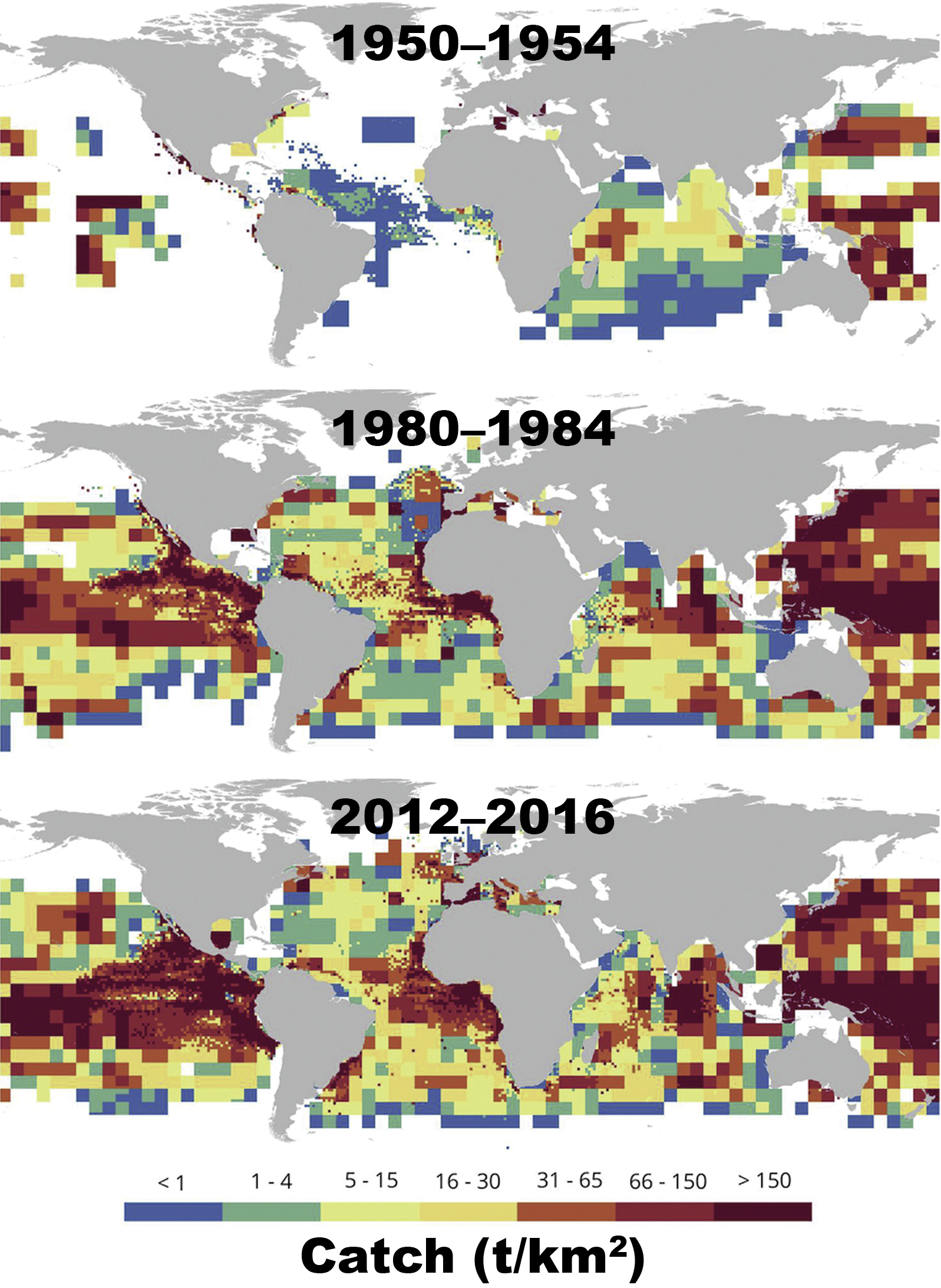 Expansion of the global catch of tuna and other large pelagics over time.

Despite worldwide demand for tuna products and considerable conservation interest by civil society, no single global dataset capturing the spatial extent of all catches from fisheries for large pelagic species across all ocean basins existed until the publication of this study. Previous efforts to spatially quantify the historical catch of global tuna fisheries have been restricted to the few taxa of major economic interest, creating a truncated view of the true extent of the fisheries for tuna and other large pelagic fishes.

In this study, we compiled and harmonized public datasets on reported catches of large pelagic by tuna fleets around the world. We have also estimated the discards caused by these activities. We spatialized these data so as to create an exhaustive, publicly-available dataset showing the evolution of historical catches and preliminary discards for these species for the 1950-2016 period.

Industrial, or large-scale fisheries for tuna and other large pelagic species have expanded globally over the last six decades, as illustrated by the opposite figure. During the 1950s, catches were largely concentrated off the coasts of North and Central America in the Eastern Pacific Ocean, and around the Western Pacific Islands. Relatively little fishing effort, and hence catches, were derived from the Atlantic and Indian Oceans. Three decades later in the 80s, tuna fisheries were active along the equatorial areas across the globe and into temperate regions in most ocean areas. In recent years, fisheries catches of tuna and other large pelagic species have been ubiquitous across all tropical and subtropical regions of the world, with the most catch caught in tropical areas. Global landed catches (plus preliminary estimates of unreported discards) of the world-wide tuna fisheries increased from around 450,000 t in 1950 to approximately 5.6 million t in 2016.

Species-wise, catches of skipjack tuna have dominated over time, accounting on average for 34% of total global catches over the 1950–2016 time period.

Relevance of this study

Improving the state of global tuna stocks is key for sustaining highly valuable fisheries that are particularly important for Small Island Developing States as well as other tropical and subtropical developing countries that have historically benefitted from these species. Transparency and full accountability are vital components for proper management, particularly in the context of supporting these regions, as specifically included in the UN Sustainable Development Goals (SDG 14.7), and more broadly for ensuring a more equitable distribution of benefits from these highly migratory species.