Selling off the sea: how our fish lost their freedom to market forces

“Over the last two decades, there has been a silent, neoliberal revolution in our oceans.” In an article published on July 17th 2015, journalist and researcher Emma Cardwell looks at how market forces have increasingly influenced the fisheries sector in the United Kingdom, at the expense of artisanal fisheries.

“We are, quite seriously, on the brink.” Jerry Percy, Executive Director of Low Impact Fishers of Europe, a group representing fishers around the continent, is worried about the future for the UK’s small-scale fleet. “If things don’t change, in some areas we’ll lose the last remnants of what was once a proud and vital industry, needlessly destroyed by government policy.”

Jerry isn’t the only one who’s worried. Greenpeace recently launched a judicial review of UK fisheries policy, arguing that it contravenes European law. “Low-impact fishers represent nearly 80 per cent of the English and Welsh fishing fleet. They operate more sustainably, and they’re integral to the economic and social wellbeing of coastal communities,” says Rukayah Sarumi, Oceans Campaigner at Greenpeace. “Yet the Government is still allocating the vast majority of fishing-rights to industrial fishing vessels. One trawler alone – the Dutch-controlled Cornelis Vrolijk – receives 23 per cent of England’s quota: almost four times that of England’s entire small-scale fishing fleet.”

How did this situation come about? The answer lies in economics. In the Fifties, economists argued that the problem of diminishing fish stocks brought about by fleet expansion and mass industrialisation should be solved by the market. They proposed that states create a limited right to catch fish that could be bought and sold.

Iceland was one of the first countries to implement this market-based policy in the Eighties. Their fish stocks began to recover, the fishing fleet grew more profitable, and economists pointed to the country as an example of what the market could achieve.

However, the privatisation of once common fishing-rights did not benefit everyone, as anthropologist Dr Niels Einarsson – an expert on Icelandic fisheries policy – describes. “Many fishermen were dispossessed. It even led to a case before the UN Human Rights Committee. This was a huge embarrassment for Iceland: we pride ourselves on social democracy.” As the policy wreaked havoc in Icelandic fishing communities, it also created huge wealth elsewhere. “Banks traded fishing rights as assets. These became valuable derivatives, and the financial sector boomed. Then it all came crashing down.”

After the fishing rights-induced boom and subsequent economic crash in 2008, Icelanders wondered how one of the world’s most equitable societies had become a community of what Niels terms “sea barons and serfs”. A popular revolution in 2009 demanded reform of the fishing-rights market, and the government promised a new, more democratic Iceland, launching the world’s first crowd-sourced constitution. But the market was tenacious. The entire financial system was reliant on fishing-rights, and both the fisheries and democratic reforms failed miserably. 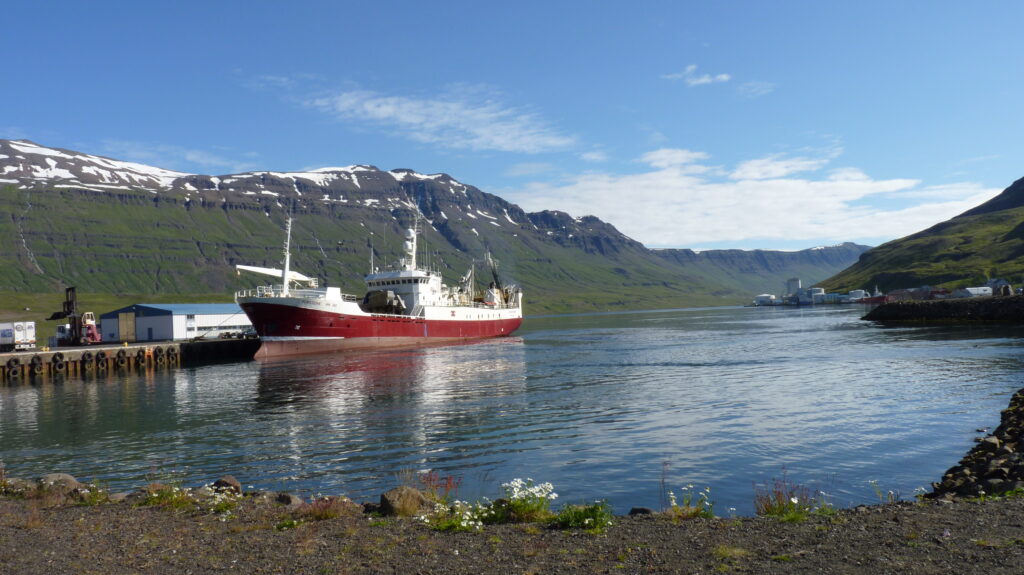 It isn’t just Iceland. All around the world, fishing-rights markets have led to dispossession. In the UK, the price of large fishing boats and their associated right-to-fish has rocketed; young people are priced out, and in many cases only large companies with the backing of banks can buy boats. This has dissuaded young people from fishing careers, and led to uncomfortable murmurs in the industry about the increasing power of the financial sector.

Filipino agency workers have replaced young people who once worked on UK boats. Due to visa requirements, they are often prevented from coming ashore. Workers at sea don’t have to be paid the minimum wage, and last year Police Scotland launched an investigation into employment on fishing boats after reports of slavery and human trafficking.

Alarmed by these changes, the Scottish Government is currently reforming the fishing-rights market. “Ministers are looking to adjust the system in Scotland to better reflect their belief that fishing rights are a national asset,” explains a Scottish Government spokesperson. “Rights should be protected within Scotland for future generations.”

Westminster is also concerned. In 2012, the Secretary of State for the Environment tried to ease the problems of small-scale fishermen by reallocating some English fishing rights. This met a legal challenge from existing rights-holders. The resulting ruling declared it legal for the government to remove rights from vessels when fishermen weren’t using them; but the judge stated that if fishing rights were being used they could be considered possessions, triggering legal obligations.

As Paul Trebilcock of the UK Association of Fish Producers points out: “People need to understand fishermen did not ask for the market system. Yet they have been encouraged by successive governments to buy rights and invest. Many have borrowed, taken out mortgages and reinvested substantial amounts of money in an effort to build legal and sustainable businesses. Is it fair to punish them for this now?”

It is difficult to reform a market once implemented. Greenpeace, who expect to find out the results of the judicial review in autumn, hope that the UK can succeed where Iceland failed, and rein in the market to create a fairer system. “Redistributing quota would create jobs, replenish fish stocks, and encourage sustainable fishing,” says Rukayah, “not doing so could mean devastation for coastal communities.”

Below, we compiled a few papers that discuss the issues associated with the individual allocation of quotas as a fisheries management tool.

When published in 2008, Christopher Costello’s research paper sparked a vivid debate between opponents and supporters of Individual Transferable Quotas (ITQs). Costello and his colleagues studied nearly 11 000 fisheries worldwide and found that fisheries under ITQs were less exploited than those using other management systems.

However, Seth Macinko, an economist at the University of Rhode Island, explained how Costello’s paper was mis-interpreted as being in favor of the privatization of fishing rights. He insisted on the shortcut that was made between the allocation of individual quotas and the privatization of fishing rights. He further made the distinction between the tool (i.e., a pre-allocated share of the catch) and the ideology that this tool must be privately owned to be viable.

According to Macinko, the possibility of managing individual quotas by publicly leasing them instead of privatizing them is wrongly overshadowed. Here is a video of his speech about EU fisheries policy at a conference at the Danish Parliament, Copenhagen, in March 2012.

Several scientific articles also highlighted the devastating social effects that ITQs have when privately-owned (as is currently the case in most countries having implemented ITQs):

Insights from Denmark, one of the countries that have implemented ITQs:

Højrup, T (2011) The Common Fisheries Policy Has To Recognize the need for common goods for Coastal Communities. Common community quotas for sustainable life-ways in coastal fisheries: the alternative to privatization of fishing rights in the home waters of Europe. Centre for Coastal Culture and Boatbuilding. 60pp. Available at: http://www.thorupstrandkystfiskerlaug.dk/thenecessity.pdf

Contribution to the Green Paper on the EU Common Fisheries Policy reform, written by a group of Danish fishers and researchers from the Saxo institute (University of Copenhagen, Denmark): http://ec.europa.eu/fisheries/reform/docs/thorupstrand_en.pdf 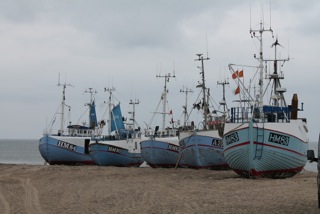 Fishing boats in Thorup Strand, North Jutland, Denmark. ©Alyne Delaney In Thorup Strand, fishers gathered in a cooperative and bought 6 million euro worth of quotas. They were then able to allocate some of these quotas to young/small-scale fishers who could not secure any loans from the bank.

Are there any ITQs in France?

The official position of France is historically in favor of a collective management of fisheries. The 1997 law on fisheries and mariculture,[1] and then the agriculture and fisheries modernization law[2] described as a collective heritage “the fishery resources exploited by France, both in waters under its jurisdiction/sovereignty and in distant waters either under international access agreements or in the high seas“. Such a collective management aims to avoid the privatization of fishing rights and to maintain an economic and social equilibrium.[3]

In 2006, a decree was published to establish the terms of quota allocation to French vessels registered in the EU.[4] France has adopted the principle of “individual non-transferable quotas”, which are distributed to each producer through the producers’ organizations and are not transferable via the market. Producers’ organizations are also in charge of allocating quotas in response to incoming and outgoing vessels. 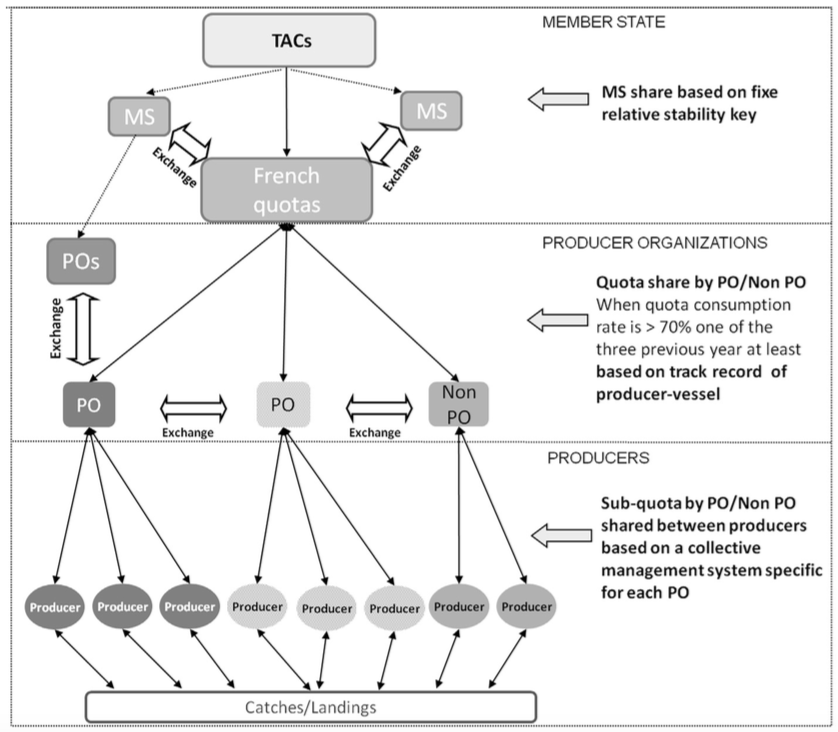 Position of French NGOs on ITQs:

Available (in french) at: http://www.bloomassociation.org/wp-content/uploads/2013/11/Livre-jaune-réforme-PCP_réponse-ONG.pdf

(p22) 3.3 Would it be possible to make more use of transferable fishing rights (individual or collective) in order to reduce the capacity of industrial fleets and, if so, how should they be implemented? What safeguards should be introduced if such a system were implemented? Could other measures have similar effects?

“Since their inception thirty years ago, ITQs have aimed to solve the question of fisheries profitability rather than to regulate the fishing pressure and reduce impacts on ecosystems.

De facto, if the implementation of ITQ in the industrial segment of the fleet were to contribute to reducing the fishing capacity, it would not solve the other problems that are inherent to this segment. In fact, it might even encourage the emergence or the exacerbation of other disturbing realities:

In any case, fishing rights and quotas (individual or collective, transferable or not) are not an objective but simply a tool serving a long-term strategy.

The choice regarding the combination of fisheries management tools must follow a discussion on medium and long-term objectives that are consistent with the Marine Strategy Framework Directive and the three pillars of sustainable development.

Are there any safeguards?

To date, no safeguards have been able to ensure that the implementation of ITQs would protect the fishery from the negative effects listed above.

Are there other measures with similar effects?

We could combine various tools such as the ecosystem approach to fisheries, the precautionary principle, long-term management plans, joint-management exploitation units.” 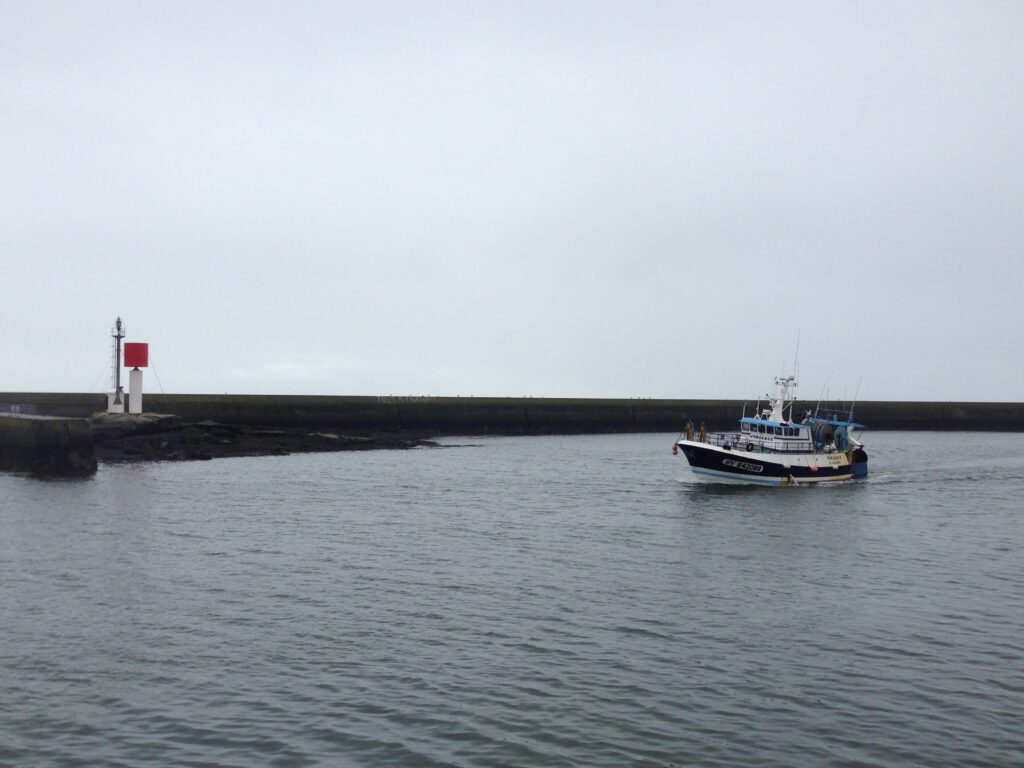