BLOOM and six NGOs (ClientEarth, LIFE, Oceana, Our Fish, Environmental Justice Foundation and Defence of the Aquatic Environment) have asked the European Commissioner for Environment, Oceans and Fisheries, Virginijus Sinkevicius, the opening of an administrative inquiry into the control of Dutch pelagic fisheries. In fact, the weak control system in the Netherlands encourages fraud and overfishing.

Also read: the letter by BLOOM and six other NGOs

Effective control of catches at the time of landing is essential in the fight against illegal fishing and misreporting. The catch data also make it possible to ensure that fishing quotas are respected. However, the Netherlands is not complying with the control rules laid down in the European regulation. On October 30, 2020, the European Commission therefore sent a letter of formal notice inviting the Dutch government to change its practices and comply with the control regulation. This letter is the consequence of a number of serious deficiencies that the Commission had identified regarding the weighing and recording of catches.

Despite this letter of formal notice, Dutch investigative journalists in 2021 revealed serious failures in the country’s fisheries control system. In particular, they point out that only two inspectors are responsible for monitoring the 400 million kilos of pelagic fish landed in the Netherlands each year. One of the reasons given for these insufficient controls is the fear that companies will land their catches elsewhere than in the Netherlands if the controls become too strict!

In the absence of change, on February 9, 2022, the European Commission sent back a reasoned opinion with a deadline of two months to take the necessary measures. If the warning were not respected, the Commission could decide to refer the matter to the Court of Justice of the European Union.

In response to this reasoned opinion, the Netherlands has put in place measures. They are effective as of April 1.

The control plan which announced these measures last February only briefly describes the different administrative and inspection procedures. It says nothing about the methods implemented to reinforce controls. Moreover, there is no mention of any sanctions, whereas in France, for example, the exemptions for the weighing after transport describe the risks incurred in the event of non-compliance. Finally, with regard to the inspectors, the text stipulates that they must be present “regularly” on the sites and in the auctions… Without a precise time indication, one can only doubt the effectiveness of this “change”.

It is obvious that the Netherlands are once again attempting to circumvent the requirements of the European regulations.

Systematic control of catches landed by Dutch vessels in France

The calamity of these so-called controls does not stop at the Dutch borders… In Boulogne-sur-Mer, France, fishers have been denouncing since 2010 the transport of unloaded catches by refrigerated truck to Dutch auctions. These catches come from demersal seines (also called flyshooters) operating under the Dutch flag or belonging to Dutch companies. This inconsistency was possible because no control took place between the landing in Boulogne and the sale in the auctions, despite being required by the European regulation. An obligation to weigh the fish on landing is indeed laid out in article 60 of regulation 1224/2009.

Consequently, French fishers mobilised in the spring of 2021 with the help of BLOOM to ask the Minister of the Sea, Mrs. Annick Girardin, for a systematic weighing of the catches. After regular blockades of debarking vessels, the French government finally put this measure in place in January 2022. However, the main industrial actors are seeking to free themselves from this weighing obligation so that they can continue to peacefully defraud.

They are seeking to expand the foreign vessel landing zone, delineated by a yellow line, to allow more vessels to be processed and to lose less fishing time… the extension of this area would mean lowering the controls’ level of stringency. The Dutch Andries de Boer, who owns among others Armement boulonnais, a fishery company in Boulogne-sur-mer, posted on Twitter his will to double the length of this zone. 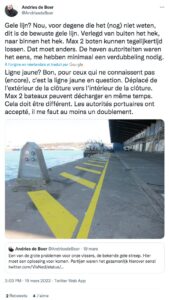 To this day, the President of the Comité Régional des Pêches Hauts-de-France (CRPMEM Hauts-de-France) is mobilised to keep the systematic measures in place. However, the elections of the Regional Fisheries Committees and of the National Fisheries Committee could shuffle the cards. If the Union des Armateurs à la Pêche de France (UAPF) were to win the elections to the CRPMEM Hauts de France, the already strong voice of the industrial fisheries would carry even more weight. Indeed, Xavier LEDUC is both President of the UAPF and Managing Director of the shipping company Euronor, a subsidiary of the Dutch giant Parleviet & Van der Plas. Geoffroy Dhellemmes, the alternate on this list, is the General Manager of France Pélagique, a subsidiary of another Dutch shipping company, Cornelis Vrolijk.

Faced with the pressure exerted by the Dutch industry, the French government must not give in. Faced with the pseudo control reforms published by the Dutch government and effective since the beginning of the month, it would be fundamentally ridiculous and inappropriate for the European Commission to issue a third letter of formal notice. The real action to be taken, and which should have been decided long overdue by the Directorate General for Maritime Affairs and Fisheries (DG MARE), is the one requested in the letter we co-signed: the opening of an administrative inquiry in the Netherlands, in order to finally shed light on the files that have remained in drawers.