Position of the French government on harmful subsidies: Open letter to the Fisheries Minister

European Fisheries Ministers are seriously jeopardising their international commitments in order to satisfy industrial fisheries lobbies rather than the public good and the protection of small-scale coastal fishers. The French government is responsible for this destructive orientation by having positioned itself, alongside Spain and Italy, in favour of the reintroduction of harmful capacity-enhancing subsidies, despite claiming the contrary. The Council is defending an unsustainable position that encourages the destruction of marine ecosystems. It introduces and maintains harmful subsidies, including the possibility – using European taxpayers’ money – of incentivizing the construction of new fishing vessels. These subsidies for the construction of new vessels were banned 15 years ago in the European Union!

As a reminder, the next European Maritime and Fisheries Fund (EMFF 2021-2027) will determine the allocation of more than 6 billion euros of public subsidies to the fisheries and aquaculture sectors, as well as to the protection of the marine environment. France and the European Union made commitments in 2015 through the adoption of the Sustainable Development Goals (SDGs) at the United Nations, notably SDG 14.6 that sets 2020 as the year for eliminating harmful subsidies that encourage overcapacity, overfishing and illegal fishing.

See our letter to the French Minister of Agriculture

The European NGOs have set clear red lines so that the EMFF does not contribute to overfishing and overcapacity and, on the contrary, enables the European Union to respond effectively to the environmental crisis in line with our international commitments. You can find our red lines in the explanatory table below. 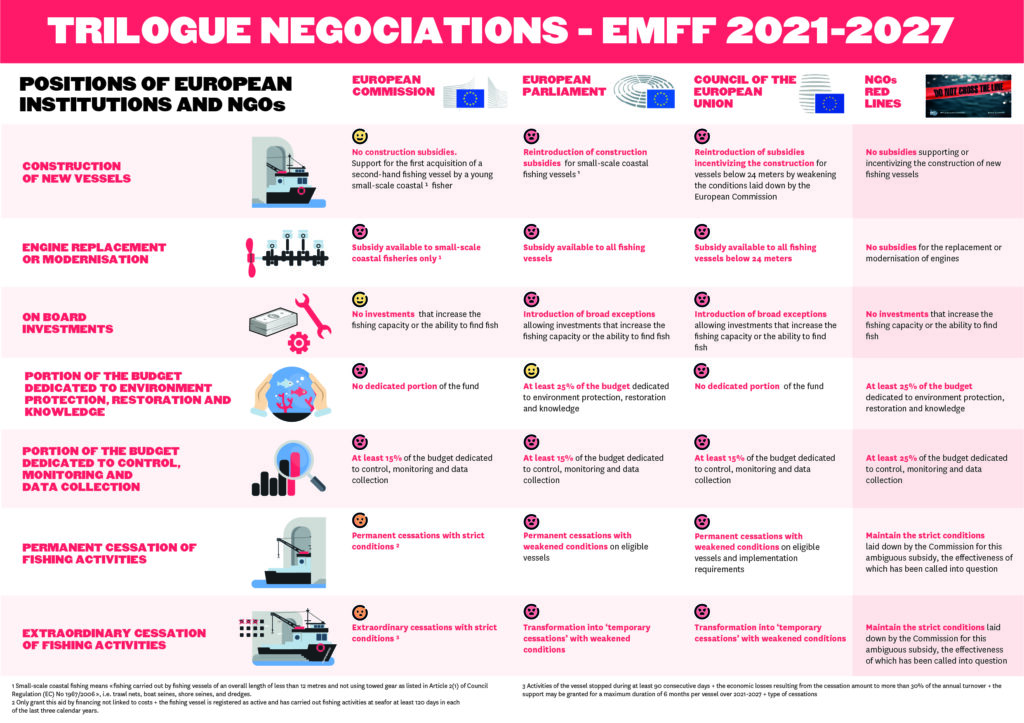