MSC caught up in a turmoil…again!

Many actors, including BLOOM, have launched the On The Hook campaign, which aims to prevent yet another downward slide by the Marine Stewardship Council (MSC). In particular, On The Hook denounces the MSC’s plan to renew the certification of the world’s largest tuna fishery in the Western Pacific: the PNA fishery.

See cover story by The Guardian and visit the On The Hook website !

An arbitrary and unacceptable distinction

The point of contention is simple: this fishery targets two species of tuna (skipjack and yellowfin tuna) using a single gear: a purse seine.[1] During the same trip, this purse seine can be used opportunistically on ‘free schools’ of tuna — the activity that is MSC-certified ­— or on schools formed around ‘fishing aggregating devices’ (FADs).[2] This practice using FADs catches many sharks, turtles, juvenile tuna and other protected or sensitive species, making it unsustainable.

Therefore, it would be totally absurd to only certify the part of the fishery that targets free schools, omitting the unsustainable part of the fishery. “Put it this way, the Soil Association certify a farm as being organic and pesticide free. It would not be credible for them to certify a certain field in farm whilst the rest of the farm uses unsustainable pesticides. That principle is the same for our fisheries” commented Richard Benyon, MP and former DEFRA fisheries minister.

Beyond this ethical nonsense, there is no scientific definition of what constitutes a free school or a school associated with a FAD. This arbitrary distinction does not seem to trouble the MSC, as it is about to renew the certification of the PNA fishery in the coming weeks.

The On The Hook group

The demands of the On The Hook collective

To launch its campaign, On The Hook formally asked the MSC to immediately suspend the certificate of the PNA fishery, but also to urgently consider the merit (or lack thereof) of certifying only part of the activities of the same fishery.

“Many members of the On The Hook have been supportive of MSC and their practices for over 20 years. However, the potential re-certification of PNA is causing serious concern amongst retailers and conservation campaigners” says Callum Roberts, a professor at York University and one of the spokespersons of On The Hook. He adds: “we can no longer trust the MSC label and instead undertake our own due diligence into the origin of tuna. The MSC and their entire supply chain must be held to account.”

Citizens against this certification

Polling by Populus (see “To go further”) shows that consumers find the current practices of the PNA fishery unacceptable. In the same questionnaire, 69% of the respondents agreed that any MSC-certified fishery must be sustainable as a whole. The survey allows us to conclude that a majority of the persons surveyed would lose confidence in the MSC should the PNA fishery’s certificate be renewed despite the FAD fishing activity. 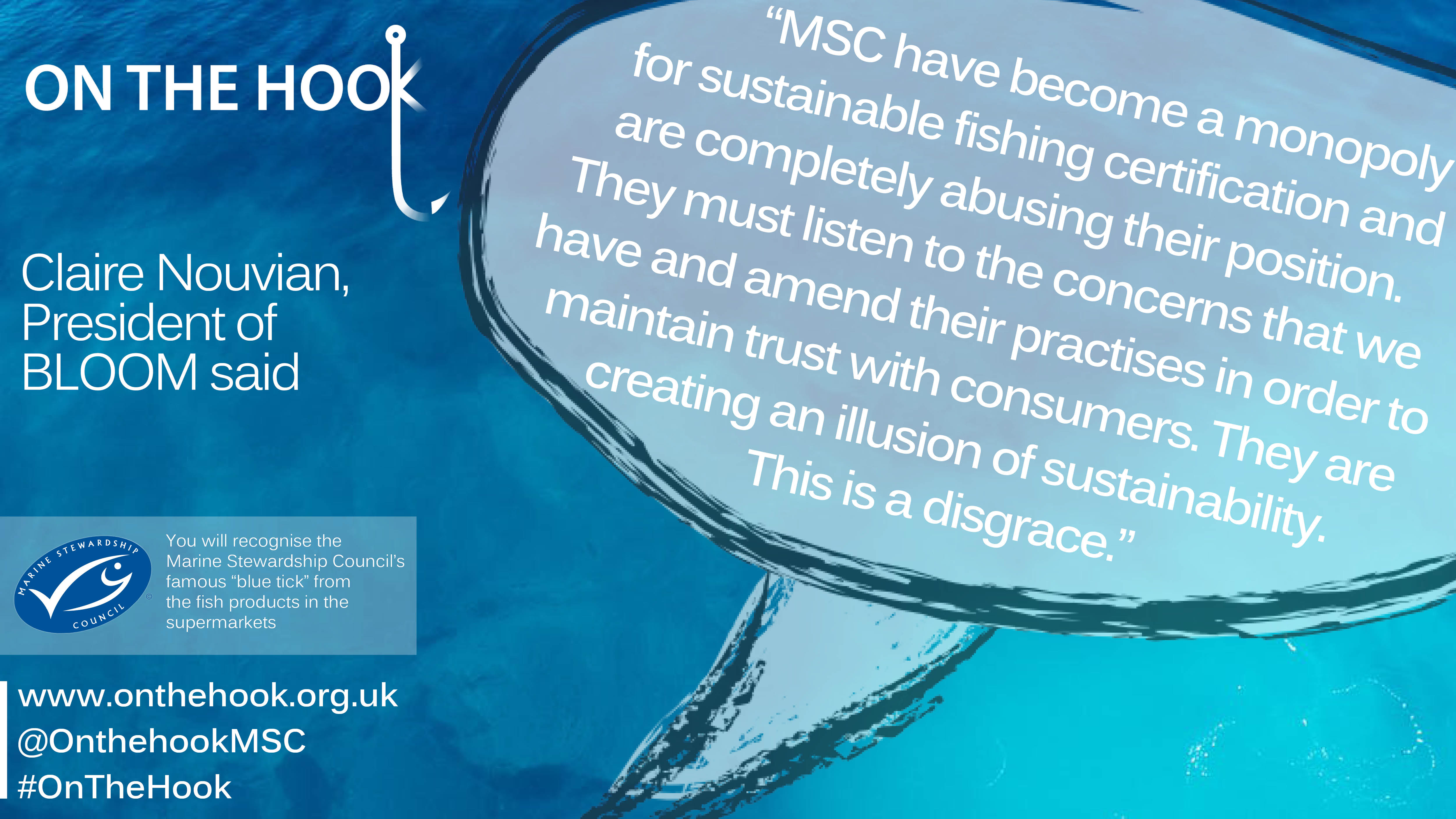 “MSC have become a monopoly for sustainable fishing certification and are completely abusing their position. It is clear that MSC, by certifying certain parts of a fishery, are creating an illusion of sustainability“, explains Claire Nouvian, President of BLOOM, who adds that “the re-certification of PNA poses a risk to the credibility of MSC. MSC is only confirming that it has gone from being a force for good to being part of the problem in our oceans. This is a disgrace.”

The On The Hook campaign was triggered by the MSC

After a long and hard negotiation, a workshop was finally organized in early June by the MSC with some 40 stakeholders (including BLOOM).

Following this workshop, our requests were not met since the MSC still does not want to suspend the assessment of the PNA fishery, but simply wants to ­— potentially — modify its standards in 2019. The MSC has just launched a new consultation (public this time), but still completely misses the point of the On The Hook campaign, preferring to talk about at-sea traceability. This consultation should feed into future decisions, of course, but it will in no way prevent the renewal (for a period of five years) of the PNA fishery.

After trying to negotiate behind the curtain for more than eight months and then having received no response from the MSC board members, it is time to put this issue into the light.

BLOOM has been fighting against dubious ecolabels for a long time

For several years, BLOOM has identified the proliferation of “sustainable fishing” labels as a barrier towards fisheries that generate jobs, respect the environment, and are ethical. We have contributed to public consultations, co-signed scientific papers, filed objections against dubious certifications. On our “misleading labels” webpage, you can find our contributions and learn more about the MSC and its unsustainable practices.

Populus interviewed a nationally representative sample of Number UK adults aged 18+ between 16th and 17thAugust 2017. Data were weighted in order to be demographically representative of adults in Great Britain. Populus is a founder member of the British Polling Council and abides by its rules. Further information at www.populus.co.uk