Marine Protected Areas : the environmental imposture of Emmanuel Macron revealed by a vote in the European Parliament

On May 3rd, the European Parliament voted on an own-initiative report on the blue economy, the result of which is not binding but testifies to the extent of MEPs’ ambition to protect the ocean, the climate and small-scale fisheries.

Caroline Roose, EELV MEP, had tabled an amendment calling for a ban on bottom trawling in marine protected areas (because marine “protected” areas are not at all protected from destructive fishing methods). Unfortunately, the European Parliament was not able to not vote on the Greens’ proposal because of an anti-ecological amendment from the political group La République en Marche (LREM), aiming to dangerously undermine international marine protection standards. This disastrous amendment was tabled by MEP Pierre Karleskind and co-signed by a large part of Emmanuel Macron’s “Marchers” in the Parliament, which torpedoed Ms Roose’s. 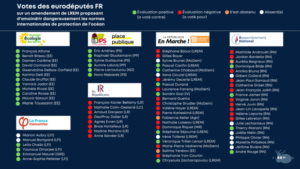 Above are the votes of the MPs who opposed (in green) the shameful amendment of LREM, those who adopted it (in red) and those who abstained (in orange). Emmanuel Macron’s new ecological betrayal of his campaign promise was not long in coming.

You will see below that some LREM MPs voted AGAINST their own amendment, which they had even co-signed. How is such a mess possible? Explanations.

WHAT HAPPENED IN PARLIAMENT?

Pierre Karlsekind, LREM MEP and chairman of the European Parliament’s Committee on Fisheries, tabled a perverse amendment proposing to ban “harmful” fishing methods only in “strictly” protected areas.1st problem: these areas are the only places in the ocean where they are already banned.2nd problem: Insidiously, this amendment calls into question the international definition of Marine Protected Areas (MPAs), which bans destructive fishing methods and industrial extractive activities in ALL MPAs.

BLOOM mobilised citizens. We posted a video by Claire Nouvian in Parliament exposing the deception. Hundreds of thousands of people discover the shameful manoeuvres of LREM and call out Emmanuel Macron and Stéphane Séjourné, president of the LREM group of MEPs in the European Parliament (and signatory of Pierre Karleskind’s amendment).

Under public pressure and taken to task by activist Hugo Clément, actress Marion Cotillard and comedian Nicole Ferroni, MEP Pascal Canfin tweeted on Friday evening that LREM will propose another amendment to replace Pierre Karleskind’s. It is indeed possible to table an oral amendment in plenary.

BLOOM asks to see the amendment that is produced on Monday. Pascal Canfin’s new oral amendment is even more pernicious than the first one: it redefines what a marine protected area is AND invents conditions to implement them that do not exist and only aim at delaying their implementation. Thousands of citizens speak out again and researchers get involved. 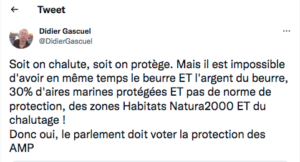 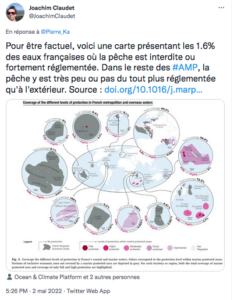 In the end, Pascal Canfin did not table his oral amendment, LREM maintained its initial perverse amendment instead of withdrawing it and LREM’s amendment knocked down that of MP Caroline Roose. The Parliament was thus unable to express itself on the ban on bottom trawling in European marine protected areas.

The traceability of votes is now available. We can see that Pascal Canfin and other LREM MPs, including the group’s president, Stéphane Séjourné, voted against the amendment of their group and colleague. Since, Pascal Canfin does not cease to make press articles rectify his vote. 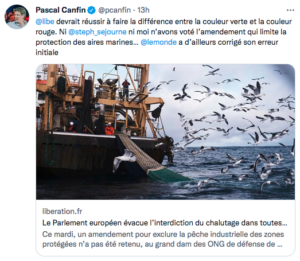 La République en Marche is thus showing its lamentable methods: the President of the group, Stéphane Séjourné, could

Their tactics are detrimental to democracy and their ties to the industrial fishing lobbies dangerous for the ocean and the climate.

A WELCOME INCONSISTENCY IN THE VOTE

In contrast, MEPs also adopted a Green amendment calling for a ban on industrial extractive activities in Marine Protected Areas by 361 votes to 208 on May 3rd. In an inconsistent move, MEPs called for the application of only part of the IUCN standards. BLOOM welcomes this inconsistency as a very good omen for the future of our seas and oceans.

THE BALL IS IN THE EUROPEAN COMMISSION’S COURT

An own-initiative report vote is non-binding, so the ball is now in the European Commission’s court to take urgent action to preserve the marine environment. Conservative forces in the European Parliament deny the science and fail to take responsibility for the urgent need to act against the degradation of the ocean and climate by industrial fisheries. In the face of this dire situation, the Commission must assume stronger political leadership.

BLOOM, which mobilised for the vote together with other NGOs, now calls on the European Commission, and in particular its Executive Vice-President Frans Timmermans and the Commissioner for Environment, Oceans and Fisheries Virginijus Sinkevičius, to produce a legislative proposal ensuring that EU Marine Protected Areas meet IUCN standards. Only effective and truly protected MPAs can enable the EU to meet its ambitious biodiversity and climate commitments.