Alongside French and English artisanal fishers, BLOOM was mobilised before the vote in the European parliament on an amendment to ban demersal seining within French territorial waters (12 nautical miles).

Few issues are able to bring French and English fishermen together behind a common cause. One fishing technique achieves this feat : demersal seining, or flyshooting as called by its dutch inventors.

Demersal seining has become so worrying due to its destructive efficiency that fishermen from both sides of the Channel have joined forces to call for a moratorium in English and EU waters. Initiated by BLOOM, Greenpeace UK and Pleine Mer, a British and a French vessel met in the middle of the Channel on May 9th to embody this union and engage in a common fight against destructive industrial fishing. This meeting was echoed by a protest at the port of Boulogne-sur-Mer, where BLOOM organised a press conference around a symbolic “crime seine.” These unprecedented actions targeted policymakers to alert them on the ravages caused by the hyper-efficiency of demersal seining, and urge them to take action. 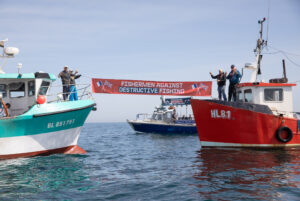 This mobilisation occurred on the eve of a political opportunity. An article of the Common Fisheries Policy regulation concerning access to territorial waters is currently being revised. An amendment, tabled by MEP Caroline Roose, aims to ban all foreign demersal seines in this area. The vote will finally take place before summer in the European Parliament’s PECH Committee.

ADAPTING TO AVOID DISAPPEARING, BUT AT WHAT COST?

Fishers’ warnings about demersal seining go back fifteen years, but have remained unheard. Political inaction and increased competition with Dutch industrial fleets has pushed some vessels that previously denounced the technique to convert to it in an attempt to compete with other demersal seine.

These investments temporarily filled the newly equipped vessels’ nets. However, they increased fishing pressure on ecosystems, accelerated the decline of the resource and inevitably led fishers to bankruptcy. While industrial actors can move their units to other areas and perpetuate the sequential overexploitation of the ocean, artisanal fishers are anchored to a limited territory, condemned to suffer the full bow of these icons of “technological fisheries”.

APPLY THE PRECAUTIONARY PRINCIPLE AND REGULATE THE TECHNOLOGICAL RACE

Fishers and NGOs reiterate the urgent need to regulate the technological efficiency of certain fishing techniques much more strictly. This efficiency, in retrospect and often too late, are recognised as harmful for the resource, ecosystems and the socio-economic balance of a small-scale fishing, already weakened by decades of competition with industry. The authorities’ blind faith in technological innovation, such as electric fishing, has led to family tragedies and economic insecurity for coastal fishermen.

To repair the fatal errors made by the public authorities, fishers and NGOs are calling for a clear and swift political act: an immediate European moratorium on demersal seining. After electric fishing, it is unacceptable that the environment and fishers once again pay the price of policies that have not applied the precautionary principle as they should have done. 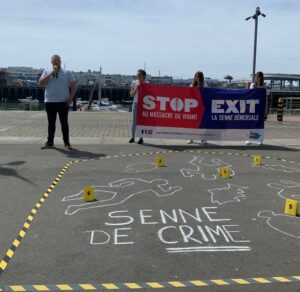