Fisheries Subsidies Negotiations back on track at the WTO

Just as the WTO nominates new Chair to steer Fisheries Subsidies negotiations towards success at MC12, the “Low Hanging Fish” campaign is back to help negotiations progress with the right level of ambition. 2019 may seem far away but the hurdles facing negotiators are numerous and need to be fully addressed in order to achieve common understanding on what a meaningful, loophole-free agreement should be.

BLOOM and The Varda Group will do all they can to assist members in the difficult but crucial task that awaits them in the next 18 months.

This decision was the only concrete outcome of MC11, where members failed to reach a legally-binding agreement to eliminate harmful fisheries subsidies, even for subsidies attributed to illegal fishing operations.

Ambassador Zapata was Mexico’s Chief Negotiator for the Trans Pacific Partnership Agreement (TPP), which includes a set of provisions on harmful fisheries subsidies (Chapter 20.16 of the TPP Agreement). He has a solid reputation of being a talented negotiator that reaches concrete results.

The Low Hanging Fish campaign now counts on Ambassador Zapata’s renewed leadership to craft an environmentally and socially ambitious agreement well in advance of the next WTO Ministerial Conference in 2019. Approximately 60% of all subsidies (i.e. US$18 billion annually) are considered “harmful” because they encourage fleet overcapacity, unsustainable and destructive fishing practices, as well as illegal fishing operations. In other words, there will be no sustainable fishing for as long as nations provide the financial incentive to overfish and maintain unviable fishing operations.

> Read our briefing on fisheries subsidies: “Time to get the math right”

Will the WTO fulfill its assignment in time for the UN’s next Ocean Conference?

At last year’s WTO Ministerial conference in Buenos Aires, the Low Hanging Fish campaign and several WTO Members warned that time was running out to operationalize commitments made at the UN and the WTO. During the first UN High-Level Ocean Conference held in New York in June 2017, a Call for Action was made including “to act decisively […] including through accelerating work to complete negotiations at the WTO” (Paragraph 13(P) of the UN Ocean Conference Call for Action). It is expected that in 2020 the UN will hold, presumably in Portugal, the Second High Level UN Ocean Conference where progress on the implementation of SDG14 will be reviewed. Will this be an opportunity for the WTO to shine… or to hide?

> Click here and scroll down to check the Low Hanging Fish campaign’s performance table showing “who did what” on fisheries subsidies at MC11.

A clear ICTSD brief to catch up on fisheries subsidies negotiations

On 5 March 2018, the international Centre on Trade and Sustainable Development (ICTSD), a Geneva-based think-tank, issued a new policy brief on the state of play of fisheries subsidies negotiations.

Less than three months after WTO MC11 in Buenos Aires agreed “to continue to engage constructively in the fisheries subsidies negotiations, with a view to adopting, by the Ministerial Conference in 2019, an agreement on comprehensive and effective disciplines that prohibit certain forms of fisheries subsidies that contribute to overcapacity and overfishing, and eliminate subsidies that contribute to IUU-fishing […]”.

After a brief review of past discussions on the issue within the WTO, the brief analyzes key issues and explores several paths forward:

(1) Subsidies to Illegal, unreported and unregulated Fishing, (2) Prohibition on subsidies to overfished stocks, (3) Subsidies that contribute to overfishing and overcapacity, (4) Notification and transparency, (5) Special and Differential Treatment. The document includes a useful Table with an outline of Key Questions, Options and Approaches.

According to ICTSD, “negotiations will need to make consistent progress over the next few months in reaching an agreement on key policy questions. It might even be helpful to establish a milestone at which high-level representatives can take stock of, and endorse, progress made, enabling the details of the obligations to be ironed out before the WTO’s Twelfth Ministerial Conference […] Much technical work remains to be done to gain further conceptual clarity and to better understand the practical implications of the various options on the table. Crafting a comprehensive and effective outcome, moreover, will require flexibility and pragmatism from all WTO members.” 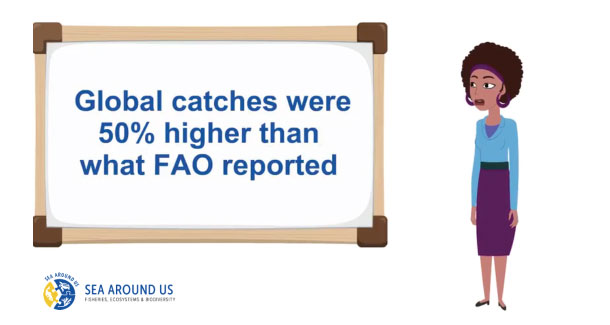 In order to be successful, the Fisheries Subsidies negotiation process will require a lot of hard work, as usual, and also good will, intellectual honesty and accurate data.

For the latter, scientists from the University of British Columbia have accomplished a work of paramount importance by reconstructing, for more than 10 years and for every single country in the world, an accurate estimation of the “real” marine catch.

The Sea Around Us, a research unit at the University of British Columbia supported by the Paul G. Allen Family Foundation, conducted a vast reconstruction of global catch data to assess the impact of fisheries on marine ecosystems and to offer mitigating solutions to stakeholders. The catch reconstruction method incorporates best estimates of unreported catches and complements both national statistics and fishery data assembled and reported by the Food and Agriculture Organization of the United Nations on behalf of countries. This effort appears especially important for specific catch sectors as artisanal and subsistence fisheries.

In the context of this massive reconstruction effort, world-renowned fisheries expert, Dr. Daniel Pauly and his team, conducted an ambitious investigation to better assess how much fish are caught at refined local scale. The movie “An Ocean Mystery: The Missing Catch” recounts this scientific effort and showcases practical case studies.

As Dr. Pauly says: “We need to know how many fish have been taken from the ocean in order to figure out what we can catch in the future“. This requires the calculation of the amount of fish caught through illegal, unreported and unregulated fisheries (IUU fisheries). Corresponding catches are usually overlooked and poorly estimated.

Missing data is a fundamental problem that hinders sound and sustainable management of resources, but there is hope that accurate fishing data could be collected and transmitted to managers in real time, including from small-scale fisheries. Such a pilot study is underway in Honduras. The movie presents how this project works.