The inauguration of the new Suez Canal will take place tomorrow, on the 6th of August 2015. With almost 190 km long (the Suez Canal is the longest in the world), its 2nd passageway has just been redone. This huge technical and economical achievement could have a devastating impact on ecosystems of the Mediterranean Sea. 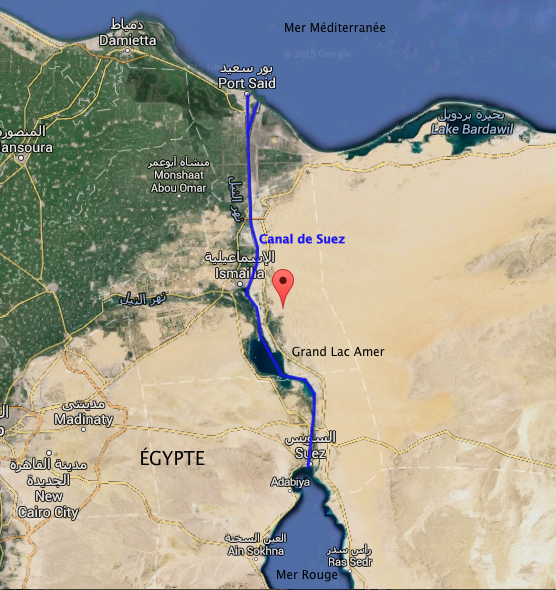 The enlargement of the canal has been done to ease and increase the traffic flow between the Red Sea and the Mediterranean Sea. Not less than 100 ships per day (over 36 000 per year) transit through this canal. So twice as much as today.

A great amount of ship repair companies, ship towing and assistance companies, industrial and touristic complexes will soon start to appear all along this new developed area. Eventually, the financial repercussions of this project could be significant. According to Sebastien Bossois, doctor in political sciences, it could reach 100 billion dollars per year for the entire area affected.[i] Thus an ambitious project, and one of the flagship projects of the Egyptian president Abdel Fattah al-Sissi.

Unfortunately, this enlargement will not be harmless on the marine biodiversity. An increase of maritime traffic goes hand in hand with an increased risk of pollution (noise, waste), chemical contamination as well as accidents. But this is not the main concern of Doctor Bella Galil, from the National Oceanographic institute of Israel.

“With the increasing number of ships crossing the canal, the number of invasive species is also at risk of exploding”, she says. “The Mediterranean is considered a semi-closed sea. It is therefore extremely sensitive to any external disruption. Its entire ecosystem could be disturbed, and with it all the human activities that depend on it.”

Invasive species with a devastating impact

Currently, 443 species of macrophytes (eye-sight visible water plants), invertebrates and fish have already invaded the Mediterranean via the Suez Canal. These migrations can happen directly for the species capable of swimming or floating and to adapt to the different marine conditions between the Red Sea and the Mediterranean Sea. But they can also happen indirectly by two different ways: by attachment to the body of the ships (fouling process), or via direct transport inside the ships, in the water containers below the ship’s flotation line. These containers guarantee the supply of the ship’s sea water, necessary to maintain the buoyancy (ballast waters) and to cool down the engines. Regarding the water containers, hundreds of groups of living species can be transported in one single ship.[iii]

Some of the invasive species introduced in this manner have a major impact on our health and the environment. It is the case of the puffer-fish Lagocephalus sceleratus for example, introduced in the east of the Mediterranean in 2003. Its internal organs contain a neurotoxin capable of provoking vomiting, breathing problems, coma and in a few cases, death. This species also damages fishermen’s nets, resulting in important economic losses. 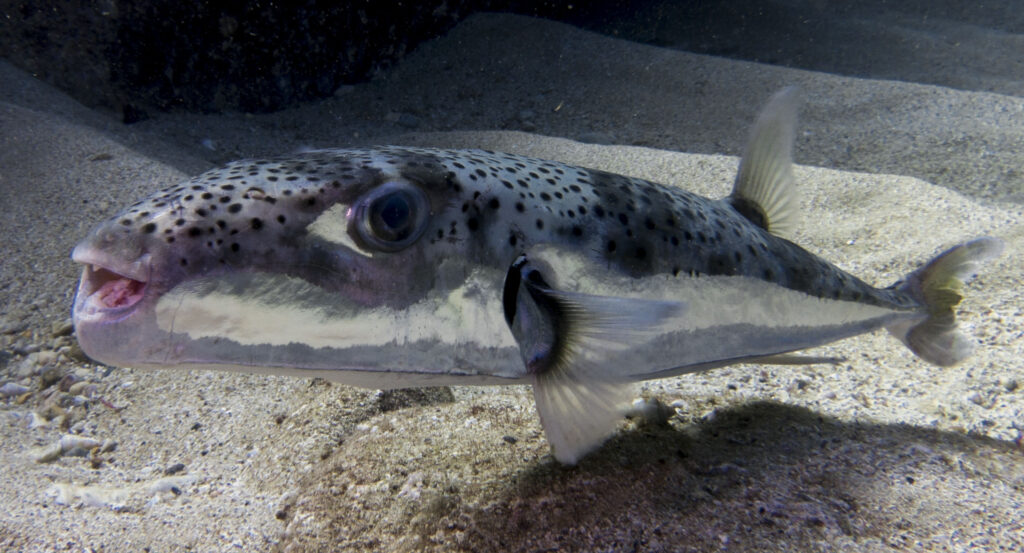 The rabbit fish Siganus luridus and Siganus rivulatus have transformed incredible algae collections that served as food to a wide range of species into extensive sterile areas.[iv] At a global scale, the invasion of external species in the Mediterranean Sea is resulting in a genetic homogenization: the area affected has less variety of species in a greater number, the native species slowly being overtaken by the more invasive species. 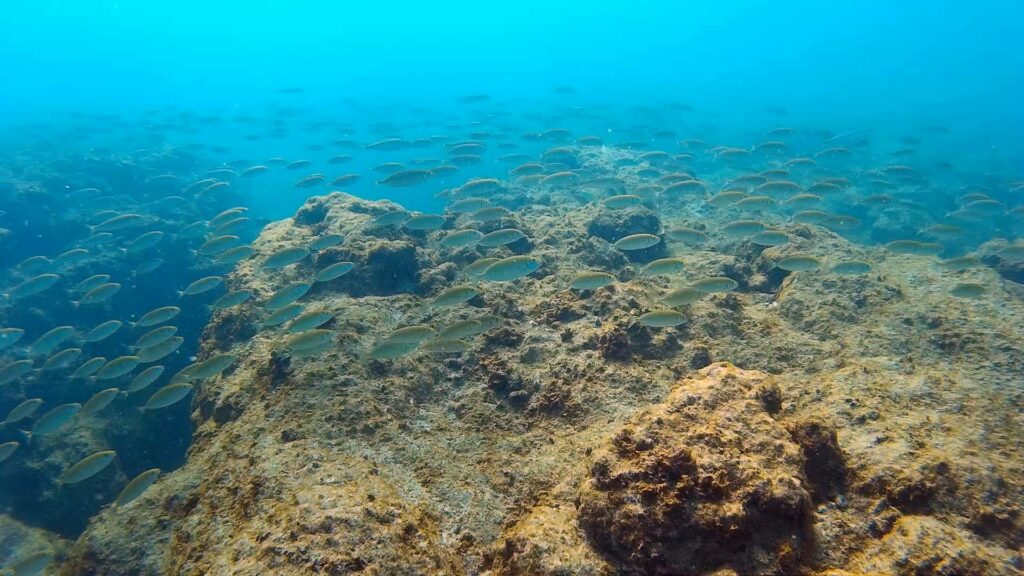 The scientific community is ringing the alarm bell

Almost 500 scientists from 40 different countries have already tried to ring the alarm bell.[v] They are requesting, amongst other things, an Environmental Impact Statement (EIS). The signatory governments present at the Rio de Janeiro Convention in 1992 had requested that this type of analysis tool be used to study projects that could have a significant impact on the environment before they are implemented. No EIS has been done for the Suez Canal. Such a study would nevertheless be able to establish the impact its enlargement could have on the marine ecosystem, thus to develop preventive measures and to mitigate risks incurred. BLOOM supports this scientific community and request for an Environmental Impact Statement in order for the damages to the Mediterranean ecosystems to be evaluated, framed and minimized.

Most invasive species that have settled in the Mediterranean have swum or floated directly from one sea to the other without passing through the water containers nor by attachment to the body of ships.[vi] Two types of measures are proposed by the scientists to reduce the invasion of exotic species. The first one consists in putting in place locks. The second one consists in recreating a barrier with high salt-content such as the one which existed at the Great Bitter Lake, located between the north and south parts of the canal. Being a natural salt swamp, the lake has helped prevent lessepsian migration during various decades. But the salt content of the lakes has gradually aligned to the one of the Red Sea and the migration barrier has disappeared following the enlargement of the Suez Canal in the sixties. Both these type of barriers (locks and salt content walls) have been in place in the Panama Canal for over a hundred years. They have never had an economic impact on the viability of the canal to date and few invasive species have managed to pass through it. 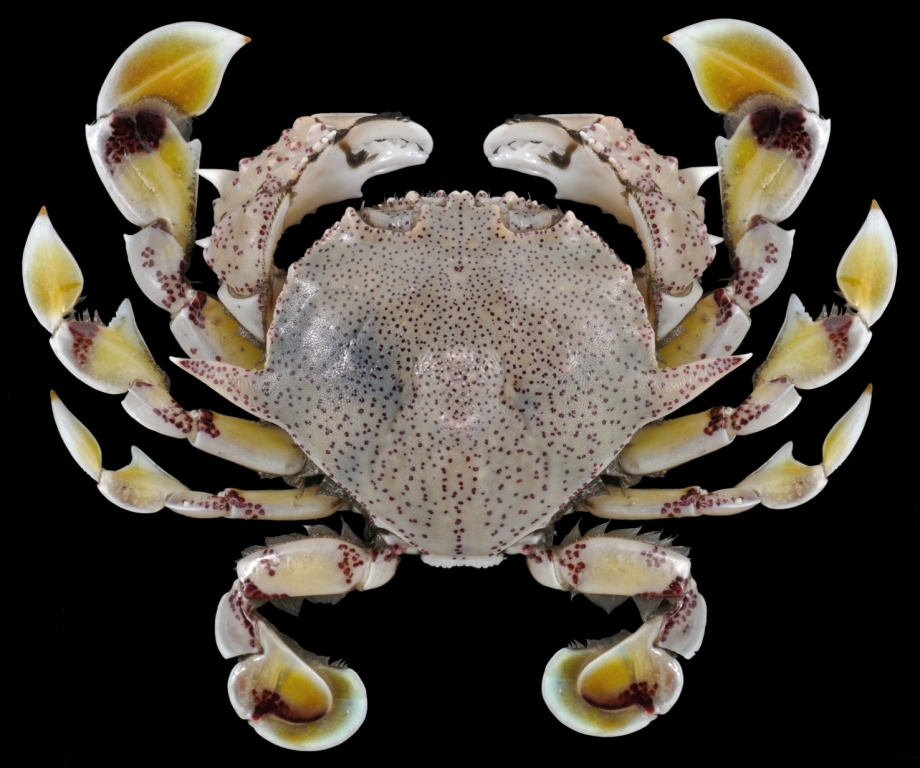 It is becoming urgent that the parties responsible for the management of the environment of the Mediterranean Sea take into account the dramatic risks the invasion of exotic species is leading to. Their spreading, made easy thanks to the warming temperatures in this area, is damaging the ecosystems and threatening the goods and services they provide for Humans. As the “biggest partner on the market and first foreign investor” in Egypt[vii], the European Union needs to help ensure a better control of the corridor responsible for the invasion of two third of the non-native species in the Mediterranean.

[iv] B. Galil et al., 2015. The Enlargement of the Suez Canal and Introduction of Non-Indigenous Species to the Mediterranean Sea. Association for the Sciences of Limnology and Oceanography, Letters to the editor

[vi] The great majority of non-native species living in the Mediterranean are located along the coast from Egypt to Turkey, which corresponds to the affected currents. If the main reason of these invasions was the involuntary transport by the ships, these species would be regrouped around the harbors (Piraeus, west of Aegean, Malta, Italy and Spain) which is not the case. See reference study by B. Galil et al., 2015