« All truth passes through three stages. First, it is ridiculed. Second, it is violently opposed. Third, it is accepted as being self-evident. » (Arthur Schopenhauer)

571 against 60: with an overwhelming majority, the European Parliament adopted on 16 April the Trilogue agreement concluded on 13 February 2019 on the ‘Technical Measures’ Regulation, which includes electric fishing. The prohibition of this destructive method will become effective from 1 July 2021. 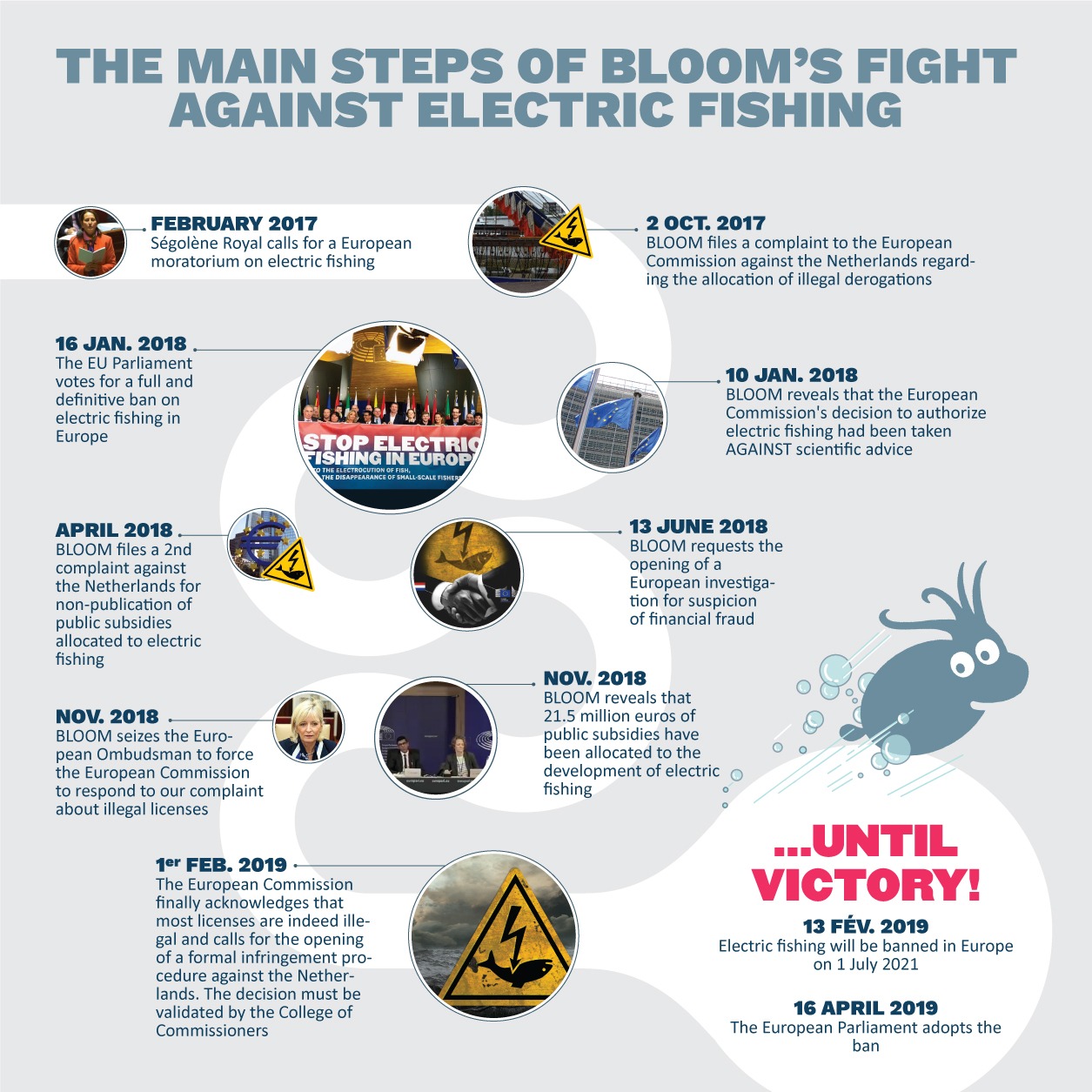 A drastic reduction by 2021

Between the publication of the regulation in the Official Journal in a few weeks and 1 July 2021, the number of trawlers authorized to conduct electric fishing will be drastically reduced from 84 to around a dozen Dutch trawlers. Furthermore, each Member State may also decide to prohibit electric fishing in its 12-nautical-mile coastal strip, i.e. 22.2 km. In France, a draft law was tabled to this effect by 126 Members of Parliament fromm all political groups. In Belgium, MEP Tom Vandenkendelaere (EPP) also wants a ban on electric fishing in Belgian waters. In the Netherlands, small-scale fishers from C-LIFE are fighting for this to be also applied, but their government is unfortunately clearly in favour of electric fishers.

More fights on the horizon

Before closing this case full of surprises, one must remember that the College of Commissioners is yet to open an infringement procedure against the Netherlands concerning their many illegal exemptions. BLOOM is also asking for the reimbursement of 21.5 million euros in subsidies that allowed the development of electric fishing. BLOOM also expects French artisanal fishers, who are suffering a massive decline in their catches of sole since the development of electric fishing, to be compensated so that their family businesses do not go bankrupt.

“In the age of misinformation, truth has won and will continue to prevail over the shameless lies of the Dutch industry, which has tried to discredit BLOOM and our painstakingly referenced arguments. BLOOM regularly faces misleading accusations. Yet, the scientific rigor of the research and information that we publicise is perfectly robust and we always counter these fallacious accusations dispassionately “, explains Frédéric Le Manach, scientific director of BLOOM.

What our campaign has revealed

This victory proves that David can win against Goliath. By challenging the electric fishery, BLOOM faced a particularly powerful and influential industry, with mafia-like practices at all levels of European decision-making.

“We have revealed many dysfunctions of our institutions: illegal licensing, the Commission’s lies about the first derogations, illegal subsidies granted for the development of this technique. Other actors have also contributed to the success of our campaign, in particular a Dutch journalist who exposed the lack of scientific research, even though it was the most prominent pretext for obtaining licenses” summarizes Laetitia Bisiaux, researcher at BLOOM.

“When we started our campaign by filing a lawsuit against the Netherlands in early October 2017, victory was still far away. The European Commission was proposing to authorize electric fishing in the North Sea, an authorization that would have led to the spreading of this destructive method across all European waters. Our goal was a total and definitive ban. We decided to campaign alone – before being joined by other small NGOs and especially by many small-scale fishers, with our audacity, our will and our courage. Our entourage sometimes told us that the battle was a lost cause and did not understand why BLOOM was wasting all its energy to fight the impossible. But perseverance, rigor and action form a successful combination. I am proud of what our team has demonstrated: an unwavering commitment, unity in the face of adversity, and the sacrifice of many weekends and hours of sleep to win this fight”, recalls Sabine Rosset, director of BLOOM.

Another element was decisive in the success of this campaign. “After we filed our first complaint to denounce illegal licenses, artisanal fishers from the North of France contacted BLOOM. We shared a vision and demands. We formed an unprecedented coalition of NGOs and associations of artisanal fishers sharing a common fighting spirit. This enabled us to get the attention of MEPs and to win the plenary vote on 16 January 2018″ explains Mathieu Colléter, responsible for institutional relations. BLOOM also received extremely valuable support from Belgian, English, Dutch, Spanish and Italian fishermen. The Association of French Fishmongers, retailers (Intermarché, Biocoop, Waitrose, Carrefour and Méricq group), the Chefs of the Relais & Châteaux network, the Culinary College of France and some Chefs of the Euro-Toques association also supported BLOOM’s campaign by refusing to provide fish sourced from electric fishing and by raising awareness of the catastrophic effects of this fishing technique.

Some politicians also played a key role in the road to victory, such as MEPs Younous Omarjee, Yannick Jadot, Isabelle Thomas and Rosa d’Amato. The mobilization of several elected representatives was also decisive, like that of François Ruffin, Erwan Balanant, Paul Christophe, Jean-Luc Mélenchon and many others in France, that of Frédérique Ries in Belgium, of Anja Hazekamp in the Netherlands, and of Richard Benyon, Zac Goldsmith, Julie Girling, John Flack and Peter Aldous in the United Kingdom.

Finally, we would never have achieved this victory without the citizens who massively mobilized several times by signing our petitions or calling on the EU elected representatives using platforms that BLOOM put at their disposal. “Thousands of emails and tweets were sent to demand a total ban on electric fishing. Citizens can and must regain power. This campaign is a good example of democracy and is indicative of citizens’ willingness to refuse the unacceptable. It gives us hope”, says Sabine Rosset. Citizens must speak out during the next European elections by choosing MEPs who defend public interest.

We would like to thank the foundations that enabled BLOOM to lead this campaign: 1% for the Planet, the Lemarchand Foundation, the Léa Nature Foundation, the Nature & Découvertes Foundation.

> Read our press release in French.

> Read our press release in Italian.

> Read our press release in Spanish.