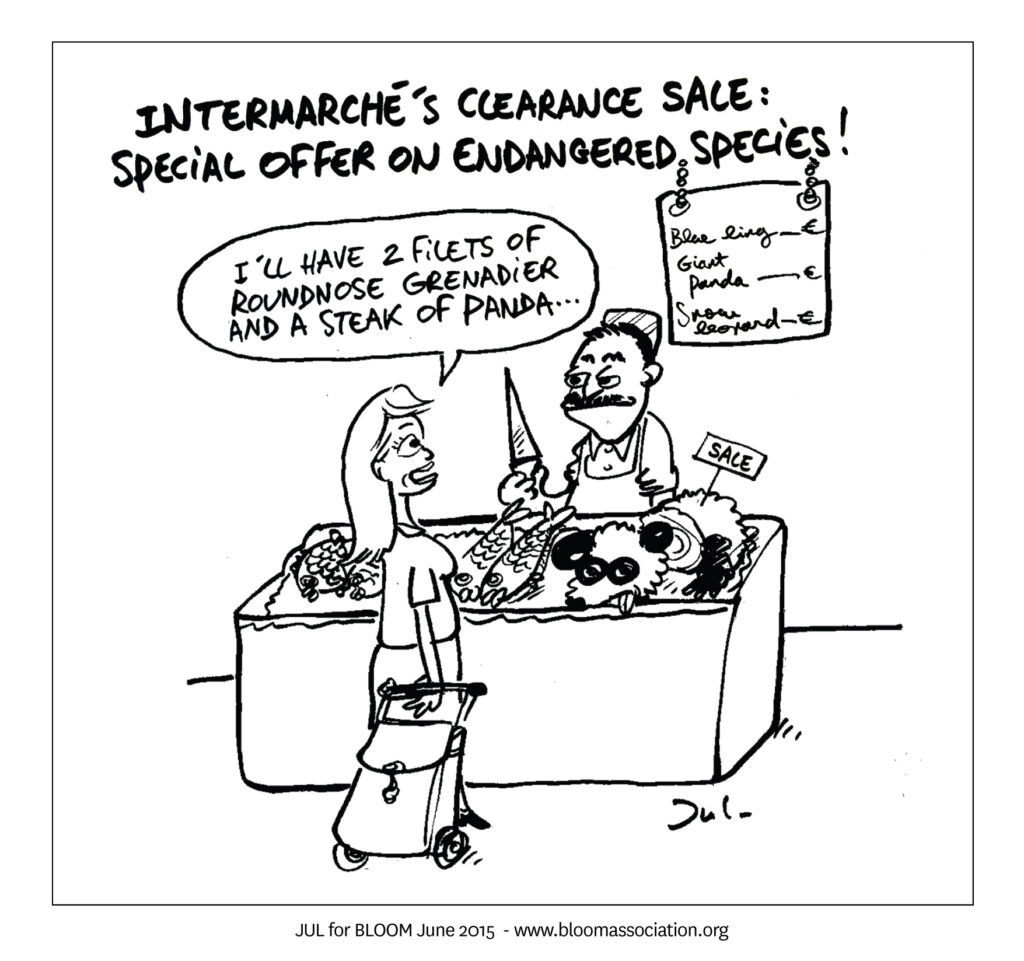 The International Union for the Conservation of Nature (IUCN) has published the first comprehensive assessment of the state of health of fish in European seas[1] and concluded that two of the three deepwater fish species mainly targeted by French industrial bottom trawlers in UK waters, off Scotland, are threatened with extinction! Roundnose grenadier (Coryphaenoides rupestris) thus proves to be “endangered” under the criteria[2] of the IUCN’s Red List of Threatened Species, and blue ling (Molva dypterygia) is assessed as “vulnerable”.

Roundnose grenadier and blue ling officially make the list of the most endangered animal species on the planet, in categories equivalent to those of the giant panda or the snow leopard. Some fish caught in deep waters by unselective trawl fishing gear, such as deep-sea sharks, are also threatened with extinction. The gulper shark Centrophorus granulosus is even considered “in critical danger of extinction”.
The IUCN assessment gives a fatal blow to deep-sea bottom trawl fisheries, mainly operated in the UK by French retail giant Intermarché. Deep-sea bottom trawling is already condemned by scientists for being the “most destructive fishing method in history” and causing possibly irreversible damage to millennial deepwater organisms and ecosystems. “Deep-sea bottom trawl fisheries have never been and will never be sustainable” commented Claire Nouvian, founder of BLOOM. “Scientists have published numerous articles to that effect, economists have calculated that these highly-subsidized fisheries cost society and would not be able to operate without public monies. Dr. Clive Trueman from the University of Southampton has even shown that deepwater fish around the British Isles are worth more alive than dead because they are extremely efficient at capturing and sequestering excess CO2 in the deep ocean. Now the IUCN shows us that the very fish species which are targeted by French commercial fishermen in UK waters and sold to French consumers are in danger of extinction! How much more does the UK government need to know in order to change its position and support the phase-out of deep-sea bottom trawling, which is being discussed in Europe? It’s high time the UK government made the protection of its own natural heritage a priority over defending the stakes of a handful of destructive foreign fleets.”

Charlène Jouanneau from BLOOM added: “If the Marine Stewardship Council (MSC), called on by Intermarché to certify its deep-sea fishery as “sustainable”, does not immediately cease the assessment it started in early 2015, it means the MSC label is a fraud that citizens should be suspicious of.”

In light of these new elements about the worrying state of health of deepwater fish populations, BLOOM encourages the UK government to unequivocally support the proposal to phase out deep-sea bottom trawling.

Note: The IUCN evaluation confirms the conclusions of a scientific workshop organized by BLOOM in 2011 stating that the deep-sea bottom trawl fisheries would never be sustainable in the North-East Atlantic, given the excessive fishing effort developed from the start by these fisheries targeting low resilient species in notoriously fragile ecosystems.[3]

Categories of the IUCN Red List. The deep-sea species caught by the Intermarché trawlers (Scapêche) are shown on the right.