Complaint against Italy for illegal fishing in Africa

Jointly with the Coalition for Fair Fisheries Agreements (CFFA), the African Confederation of Small-Scale Professional Fishing Organisations (CAOPA), the Regional Partnership for Coastal and Marine Conservation (PRCM) and Danish Living Seas, BLOOM has lodged a complaint on 31 January 2019 with the European Union for illegal activities of Italian trawlers inside the waters of Sierra Leone. We ask the European Commission to launch an infringement procedure against Italy.

The Italian fisheries administration has not respected its obligations to sanction the activities of Italian trawlers inside the waters of Sierra Leone. It is thanks to information collected by small-scale fishers of Sierra Leone — intersected with satellite (VMS ; Vessel Monitoring System) and radio data (AIS ; Automatic Identification System) obtained by Global Fishing Watch (see map below) — that several Italian trawlers registered in Sicily were incriminated (registered in Palermo and Mazzara del Vallo and belonging to Matteo Cosimo Vincenzo ASARO and Italfish). Italy is accused of not having applied the measures of control, inspection and sanctionning of fishing activities carried out within the framework of the Common Fisheries Policy (CFP), which include in particular dissuasive penalties[1] that aim to fight illegal, unreported and unregulated (IUU) fishing.[2] 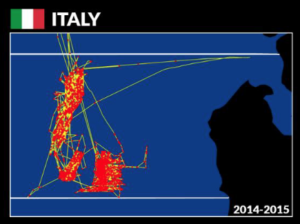 Examples of reconstituted trajectories (yellow) and fishing areas (red) of vessels using data obtained from Global Fishing Watch and analysed by Oceana in a 2017 report. Tracks show illegal incursions by European vessels inside the coastal zone of Gambia between 2012-2015. These examples, which are not the object of the current complaint against Italy, are shown here to illustrate how VMS and AIS data can be used to identify vessels carrying out illegal fishing.

The trawlers incriminated by BLOOM and the coalition did not respect the regulation of the fishing licences granted to them by Sierra Leone, such as the prohibition of fishing inside coastal waters (reserved to small-scale fishers), the obligation to ask local authorities for an authorisation to tranship at sea, and the prohibition of capturing octopus and squid on the spawning grounds of these species. These same vessels have a history of illegal activities in the area, such as the illegal capture of sharks and shark finning, illegal incursions inside the waters of Guinea Bissau and the use of prohibited gear in Gambia. This heavy legacy, documented at the time by Oceana, CFFA and Greenpeace, has led to the opening of an infringement procedure by the European Commission against Italy in December 2016 (infringement n°: 20152167). To this date, this procedure remains unresolved.

As we wait for Itlay to put its own house in order, France does not seem in a better position to enforce European regulations upon its vessels fishing in foreign waters, according to the testimonies on the activities of its tuna fishing fleet operating in the Indian Ocean revealed by Cash Investigation on 5 February 2019.