On 26 June 2022, BLOOM and Mediapart reveal the results of an exclusive investigation: 95% of Dutch vessels that received public subsidies to help weather the COVID-19 crisis because of “temporary cessation of fishing activities” cheated the subsidy allocation criteria in some way or another. By lacking to control the subsidies distributed and by initially excluding small-scale fisheries (less than 12 m boats) from the aid scheme, the Dutch government is closing its eyes on a fraud to the EU’s financial interests and giving its industrial fishing fleet a major financial advantage.

In response to the health and economic crisis caused by the COVID-19 pandemic, the European Union made emergency aid — known as “temporary cessation” — available to the fishing sector to compensate vessels that remained docked and inactive.[1] While the aid scheme was European, it was up to each Member State to decide on allocation criteria. In 2021, BLOOM had already analyzed the COVID subsidies allocated by the French government to its fishing sector and shown that the most powerful companies and the most destructive fishing gears (such as bottom trawling, dredging, and demersal seining) were the main beneficiaries.[2] This situation was a direct result of the criteria introduced by the French government, which BLOOM had denounced upon their publication.

In the Netherlands, the Dutch ministerial decree that set the conditions for granting these “temporary cessations” went even further than the French decree as it explicitly excluded small-scale fishing (all vessels under 12 meters) from the aid scheme. This discriminatory measure shows — once again — that the Dutch government prefers to support its large, devastating industrial vessels rather than its far more socially and ecologically virtuous small-scale coastal fishers. Overall, close to 6 million euros have been unduly allocated by the Dutch government almost exclusively to beam trawlers, otter trawlers and demersal seiners. Yet these fishing techniques are the most destructive for marine biodiversity, climate and jobs.

Periods of inactivity not respected

In order to benefit from these temporary cessation subsidies, eligible vessels had to comply with only two obligations:

Our analysis shows that only 12 of the 254 Dutch vessels identified through their AIS data (out of 269 in total) complied with these two rules.[3]

Our study is based on two data sources, which allowed us to cross-check the list of EMFF beneficiaries published by the Dutch administration, as explained by Augustin Lafond, data scientist at BLOOM and co-author of the study: “Using the online platform Global Fishing Watch, we were able to track the activity of each of the 254 subsidized and identifiable vessels (out of 269) and thus determine their fishing days, days of inactivity, and periods during which they turned off their geolocation system. Using landing data from some of the Dutch auctions, we were able to determine that switching off navigation systems was indeed linked to intentional illegal fishing. We were thus able to identify even more fraudulent vessels.”

By cross-checking these sets of data, we were able to establish five profiles for the compensated vessels:

Classification of the 254 subsidized and identified vessels according to their compliance or non-compliance with EU laws and the conditions set forth to receive subsidies.

Illustration of a typical fraud case: the ‘SL-27’ ship

BLOOM and Mediapart were able to reconstruct the fishing or inactivity days of the fishing vessel SL-27, a 35-meter demersal seiner. AIS data were fragmentary but they were cross-checked with auction data. Thus, it became clear that during its period of public subsidization (COVID compensation), the SL-27 vessel had no period of seven consecutive days of inactivity in port:

In this case, no period of seven consecutive days of inactivity is observable, and the fraud is therefore characterized.

Activity profile of the SL-27 fishing vessel during its temporary cessation period. 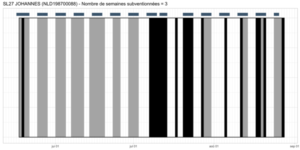 “On top of not respecting the cessation of fishing activities and keeping its AIS turned on at all times”, explains Laetitia Bisiaux, researcher at BLOOM and initiator of this study, “the SL-27 seiner is partly fishing in the Channel, a zone of high tension between French fishers and Dutch industrials, who are accused of plundering the resource. This vessel therefore symbolizes the capture of public subsidies but also the total disrespect that Dutch industrial fishers show towards their neighbors”.

Screenshot of the trajectory of the SL-27 seiner between May 18, 2020 and August 27, 2020, the period for which this vessel received subsidies to remain docked (see original data on Global Fishing Watch) 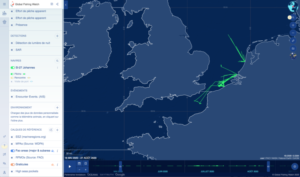 [1] Through Regulation (EU) 508/2014, the European Union amended in April 2020 certain allocation rules of the European Maritime Affairs and Fisheries Fund (EMAF, 2014-2020), in order to quickly release temporary cessation aid for the fisheries sector.

[2] 82.5% (i.e. EUR 12.2 million) of the COVID subsidies were received by vessels using destructive fishing methods. On the other hand, seven companies/groups representing only 0.8% (53 vessels) of the French fleet received 28.5% of the total subsidies.

[3] Fifteen ships were longer than 12m but shorter than 15m; in these cases, we were thus not able to collect AIS data.