Analysis of the Parliament’s vote on electric fishing

Amendment 303, tabled by French MEP Younous Omarjee and co-signed by 64 other MEPs dealt with Article 7, which lists the prohibited fishing gears. 402 MEPs voted in favor of a definitive ban on electric fishing in Europe. 232 voted against and 40 abstained. Results are available online. Below is an analysis of the vote’s results.

Analysis of the vote according to political groups 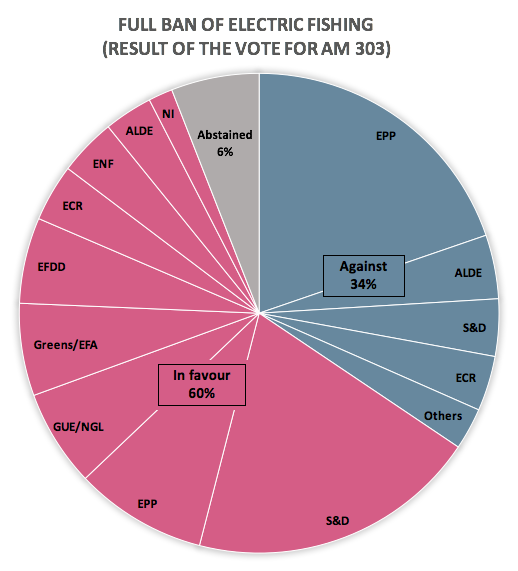 Of the eight political groups represented at the European Parliament, the European United Left/Nordic Green Left (GUE/NGL), the European Greens/European Free Alliance (Greens/EFA), and the Progressive Alliance of Socialist & Democrats (S&D) massively voted in favor of a full ban thanks to the mobilization of French MEPs Younous Omarjee, Yannick Jadot and Isabelle Thomas.

Within the S&D group, Germany stands out. This could be explained by the Netherlands having commercial interests in the German fleet, which prevented MEP Ulrike Rodust from championing this fight, unlike during our deep-sea bottom trawling campaign where she was instrumental.

Analysis of the vote according to countries

Delegations from France, Italy, the UK, Ireland, Estonia, Greece, and Cyprus overwhelmingly voted for a full ban and championed the fight against electric fishing.

On the contrary, none of the Dutch MEPs but Ms. Anja Hazekamp (GUE) voted for the full ban. MEPs from Denmark, Germany, Poland, Spain and Bulgaria also mostly opposed the full ban.

This vote from Parliament will soon by discussed as part of the trilogue between the Parliament, Council and the Commission. BLOOM’s campaign continue: now we need to convince each Member State to support and full and definitive ban on electric fishing that that it becomes the new standard in Europe.