VICTORY FOR THE OCEAN : 16,000 km2 of fragile ecosystems spared from deep-sea fishing, at long last!

It took four years longer than planned, but the European Commission did it. Consistent with the reformed European Deep-Sea Fishing Regulation adopted in 2016 (n°2016/2336), for which BLOOM fought for nearly seven years with partner NGOs, the Commission announced today the closure to all bottom contact fishing gear of 87 areas beyond 400 m depth to protect vulnerable marine ecosystems off the coasts of Ireland, France, Portugal and Spain. 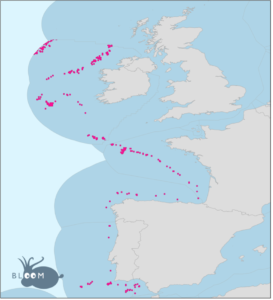 Map based on ICES data showing the 87 zones with Vulnerable Marine Ecosystems which will now be closed to bottom fishing below 400 m.

BLOOM founder Claire Nouvian reacted enthusiastically to the Brussels announcement: “It’s a day of bliss. The remarkable deep-sea ecosystems beyond 400 meters will FINALLY stop being crushed by huge industrial gear that pulverizes thousand-year-old corals, century-old sponges and sharks, fragile finned “Dumbo” octopuses and myriads of extraordinary species, which have been the collateral victims for more than 30 years of the insatiable greed of industrial fleets. »

The Commission had to face fierce opposition by industrial fleets and their most loyal lobbyists: the States. France and Spain have long blocked sending the scientific data which were necessary for mapping the most extraordinary marine environments to be protected as a priority.

Last July 26th, during a stakeholder meeting, Spanish industrial actors even explicitly threatened to take the European Commission to Court if it dared apply the law and protect thousand-year-old ecosystems. BLOOM had denounced the odious and shocking intimidation regime that the industrial fishing operators generate to fight the protection of the environment and reminded them that instead they should apologize for ransacking for decades and with total impunity a unique natural heritage which presents, in addition to a remarkable biodiversity, the interest of storing very efficiently and in the long term the CO2 that we emit and thus serves as a particularly valuable carbon sink in the fight against climate change.

Under maximum pressure, the Commission could have caved in, as happens too often. But not this time. Thanks perhaps to a growing awareness that the simultaneous collapse of the biodiversity and the climate threatens humanity itself, thanks for sure to the political will of the Commissioner for the Environment, Oceans and Fisheries, Virginijus Sinkevičius, the protection of the ocean and the will of citizens prevailed over the interests of industrial lobbies.

BLOOM welcomes this decision and encourages Commissioner Sinkevičius to enrich his legacy by setting the course for a ban on bottom trawling in all hitherto falsely-named “protected” marine areas in the European Union through the long-awaited “EU Ocean Action Plan”, expected since the spring 2021 and blocked by the trawl lobby. “May Mr. Sinkevičius’ mandate be remembered as the tipping point when the Commission shifted to an unfailing protection of the general interest” wishes Claire Nouvian.

Beyond the protection of our common, irreplaceable and marvelous natural heritage, it is the whole biosphere that is at stake.

N.B : BLOOM won these hard-fought European battles in close cooperation with many international NGOs, including the Deep Sea Conservation Coalition and The Pew Charitable Trusts.