Electric pulse fishing is a technique that consists in sending electroshocks in the sediment to capture flatfish species living in it. This technique was banned in 1998 by the European Commission,[1] but “experimental” exemptions were delivered for the North Sea area (see map) at the request of the Netherlands: 5% of the trawlers’ fleet of each Member State were authorized to be equipped with pulse fishing gears in 2007.[2] The first Dutch boat was equipped in 2009 and was quickly followed by 19 others boats until the 5%-quota was reached in 2010.[3] The Commission then granted 22 additional derogations and 10% of the Dutch fleet were equipped. 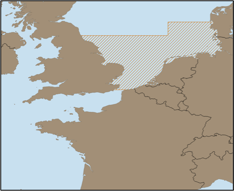 Map of the experimental zone where electric pulse fishing is authorized (hatched). This area corresponds to the one proposed by the European Commission to the Council and European Parliament for full authorization.

Since then, the Dutch have also invested in foreign fleets (Germany, Belgium, UK) to expand the spread of this technique under the 10% allowance threshold. Today, over 100 boats practice pulse fishing in the North Sea.[4]

An extreme environmental impact for habitats and species

Since the first exemption was granted by the Commission, the few studies available on the topic have only compared pulse fishing with “conventional” bottom trawling,[5],[6],[7],[8] arguing that pulse fishing was more energy-efficient and less impacting on the habitat (through flawed arguments such as “the gear is less heavy”, although it is not the weight of the gear but its motion that causes the impact on encounters). Some fishermen, in particular the French and small-scale fishers of Europe,[9] strongly criticize this fishing method for its hyper-efficiency and violent impacts on the resource: fish often display burns, bruises and deformation as a result of the electrocution.[10] In addition, there are still no studies on the impact of pulse fishing on electro-sensitive fish such as sharks and rays.[11]

Recently, BLOOM called on France to propose a total European-wide moratorium in order to stop this latest aberrant development of industrial fishing as a response to the decline of fish stocks. BLOOM has also called on the National Fisheries Committee to jointly make this request, but we have received an answer of no reply from them.

Pulse fishing soon to be legal?

A joint initiative of the Dutch Ministry of Economic Affairs and the Dutch industry, the International Dialogue on Electric Fishing was held in Amsterdam on 20 January 2017.[12] Its goal was to increase the acceptability of this new fishing method by European decision-makers and fishers.

A clear and ambitious political statement is urgent given that the European Commission recently proposed to the Council of the Union and to the European Parliament that this fishing method be adopted in a formal and definitive way in the North Sea (see map).[13]

[1] Council Regulation (EC) No 850/98 for the conservation of fishery resources through technical measures for the protection of juveniles of marine organisms.

[2] European Community (2007) Council Regulation (EC) No 41/2007 of 21 December 2006 fixing for 2007 the fishing opportunities and associated conditions for certain fish stocks and groups of fish stocks, applicable in Community waters and, for Community vessels, in waters where catch limitations are required. Official Journal L 15: 244.

[13] European Commission (2016) Annexes to the Proposal for a Regulation of the European Parliament and of the Council on the conservation of fishery resources and the protection of marine ecosystems through technical measures, amending Council Regulations (EC) No 1967/2006, (EC) No