On this page, follow BLOOM’s European campaign on the future European Maritime and Fisheries Fund (EMFF). This fund will be endowed with more than 6 billion euros and will cover all European public subsidies allocated to the fishing sector, aquaculture, and the protection of the marine environment from 2021 to 2027.

This fund is thus of paramount importance, as it goes far beyond the sole problem of proper administration of public monies. Our challenge is major: we must prevent the reintroduction of aids for the construction of new fishing vessels, which were banned in 2004 in Europe. Should the European Union reintroduce such aids, it would trample its international commitments, particularly in the context of the Sustainable Development Goals (SDGs) adopted in September 2015 by the United Nations’ General Assembly.

— The chronology below is presented in ante-chronological order, from the most recent event to the oldest —

BLOOM and 110 civil society organisations issued a statement to WTO (World Trade Organisation) members urging them to reach an agreement to eliminate harmful fisheries subsidies by 2020, as required by Sustainable Development Goal (SDO) 14.6. The Twelfth Ministerial Conference, which was scheduled to be held from 8 to 11 June 2020 in Nur-Soultan, Kazakhstan, and to conclude the agreement, was cancelled due to the COVID-19 pandemic. However, Ambassador Santiago Wills (Colombia), in charge of the negotiations, assured that the work in progress was and should continue.

From 3 to 7 February 2020, the Ocean Week organised by Brussels marine NGOs was held in Brussels. BLOOM and the coalition of NGOs advocating for the elimination of harmful subsidies organised a conference entitled “EU Fisheries Subsidies – Lessons from the Past“. 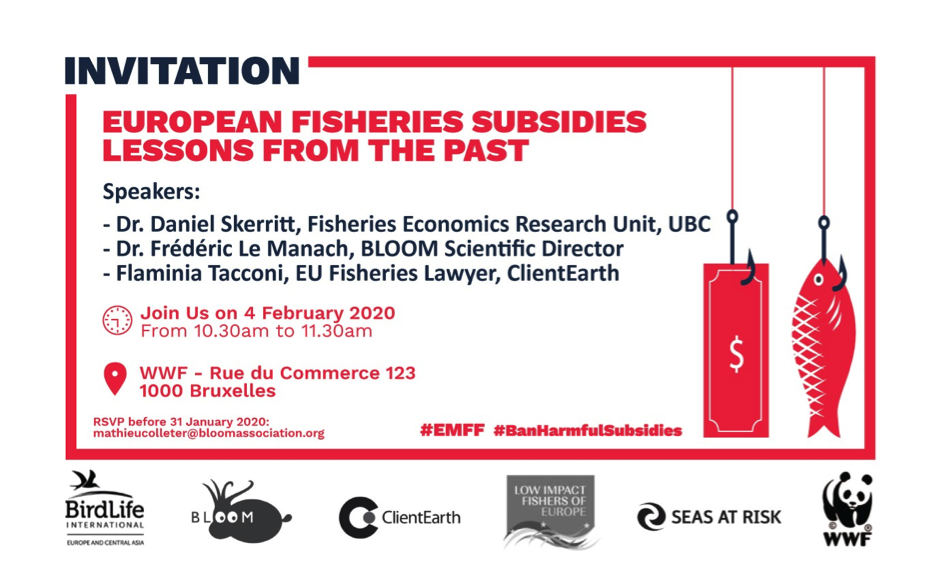 Following the vote in the Fisheries Committee on 12 November, the trialogue negotiations on FEAMP have started. The first two meetings held on 19 November and 10 December 2019 did not result in significant progress on the contentious issues. 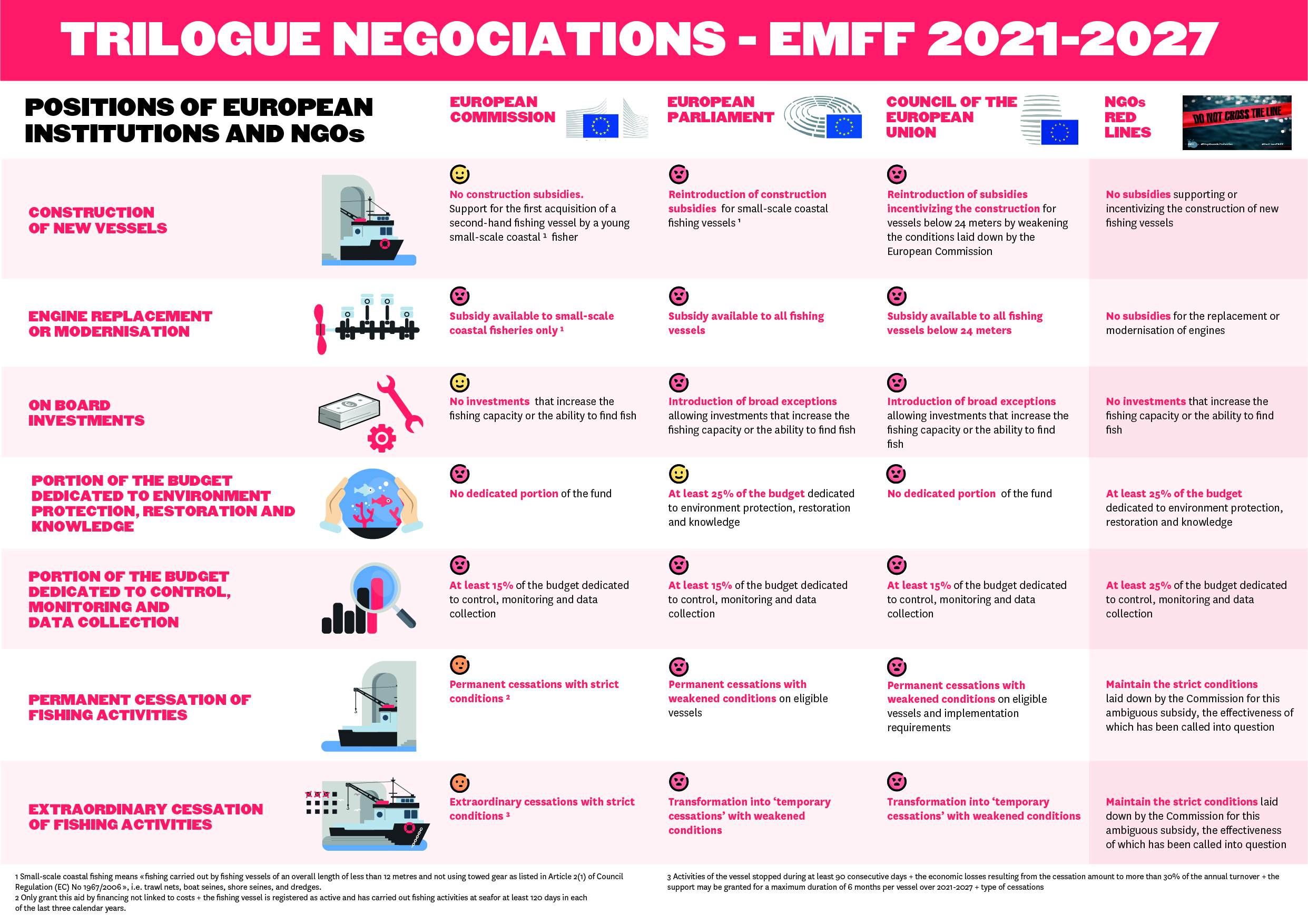 Commissioner Virginijus Sinkevičius participates in his first trilogue meeting on the EMFF. On this occasion, BLOOM questions the Commissioner and reminds him of the red lines presented on 19 November, i.e: 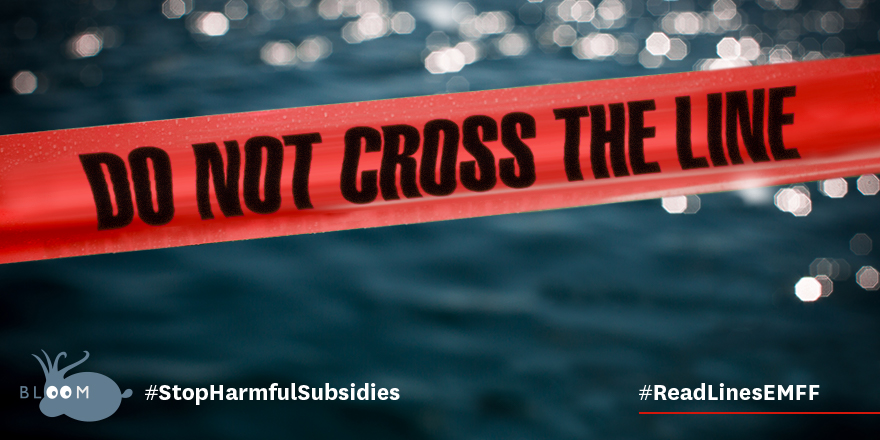 BLOOM, along with representatives from environmental NGOs BirdLife, ClientEarth, Seas At Risk and WWF, met on Tuesday 19 November with Virginijus Sinkevičius, the future Commissioner for Environment, Oceans and Fisheries. This meeting follows the confirmation by the European Parliament’s Committee on Fisheries on Tuesday 12 November of the disastrous position adopted by the former Parliament for the next European Maritime and Fisheries Fund (EMFF).

By 20 votes against 6 (and 2 abstentions), they confirmed the catastrophic position adopted by the former Parliament in April 2019. Amongst other things, this position reintroduced public aid to build new vessels, although such subsidies were banned in Europe since 2004 because of their direct role in overfishing.

We publish the first version of our advocacy document against the reintroduction of harmful subsidies such as those for the construction of new vessels. This document is intended for elected representatives and other political decision makers, in particular within the European Commission and the Council of the European Union (i.e. Fisheries Ministers) but is available to all citizens. Versions also exist in French, Spanish, German, and Italian.

As Member states of the World Trade Organization are seeking a multilateral agreement to ban harmful subsidies that encourage overcapacity and overfishing, European fisheries ministers heavily backtrack and take a position betraying international trade commitments by the European Union.

Along with other NGOs from our coalition (BirdLife Europe, ClientEarth, and Seas At Risk), we are launching the iPoliticsEU platform for EU citizens to ask key policy makers to eliminate harmful fisheries subsidies in the European Union.

> More about this platform

BLOOM and the other NGOs from our coalition coalition (BirdLife, ClientEarth, Seas At Risk, and WWF) react to the appointment of the new European Commissioner for the Environment and Oceans, Virginijus Sinkevičius, in a joint statement. We demand his support so that no harmful subsidies are allowed in the European Union.

The European Commission sounds the alarm for new MEPs over the deplorable vote of the former Parliament. Director-General for Maritime Affairs and Fisheries of the European Commission, João Aguiar Machado, agrees with our analysis: “the EMFF discussions give me the impression that our collective commitments to sustainable fisheries are disappearing and that we are abandoning these common ambitions”.

The Council of the European Union adopts its general approach on the next EMFF and validates the destruction of marine ecosystems by encouraging a weak management of European fisheries, and by wishing to reintroduce harmful subsidies. France played a major role in this decision.

Under BLOOM’s impetus, over 4,500 citizens send an open letter to French President Macron in order to remind him that his actions are utterly inadequate with his promises, and that France is taking part in digging the ocean’s grave.

While the Council of the European Union is due to announce its position on the EMFF on 18 June, several world-renowned scientists speak out publicly so as to inform policy makers and citizens of the urgency of the situation.

On Ocean’s Day, BLOOM calls for the mobilization of citizens in order to block French President Macron and to get France to change its position vis-à-vis harmful subsidies. One thing is certain: if France does not radically change its orientation to finally support citizens against the destructive appetites of industrial lobbies, President Macron will bear the responsibility for the failure of the entire 2030 agenda on the international scene.

The Plenary session of the European Parliament confirms the position of its Fisheries Committee and takes a disastrous position on the EMFF, calling for the reintroduction of harmful subsidies such as those for the construction of new vessels, in stark opposition with the United Nations’ Sustainable Development Goals.

> Read BLOOM’s analysis of the vote (in French)

BLOOM calls on MEPs to follow key recommendations aimed at protecting marine ecosystems and eliminating subsidies that would fuel overcapacity and overfishing, with the aim of reversing the catastrophic position adopted by the Parliament’s Fisheries Committee.

24 of the 27 MEPs on the European Parliament’s Fisheries Committee agree on a dramatic proposal on the next EMFF. As Member States of the World Trade Organization seek to multilaterally ban subsidies that encourage fishing fleet overcapacity and overfishing, parliamentarians have just disavowed the European Union’s commitments at the international level, instead proposing to reintroduce such harmful subsidies. A series of retrograde amendments, adopted by 12 votes against 9, makes it possible to finance the construction, renewal and modernization of European fishing fleets and to thus increase the pressure on fish populations and marine ecosystems.

On the eve of a crucial vote at the European Parliament’s Fisheries Committee on the EMFF, BLOOM deciphers and analyzes key amendments proposed by Brussels-based NGOs and for which MEPs should vote for in order to protect marine ecosystems and those who depend on them.

On the same day, BLOOM’s founder Claire Nouvian writes an open letter to MEPs to warn them and raise their awareness of the stakes of harmful proposals made by industrial fishing lobbies.