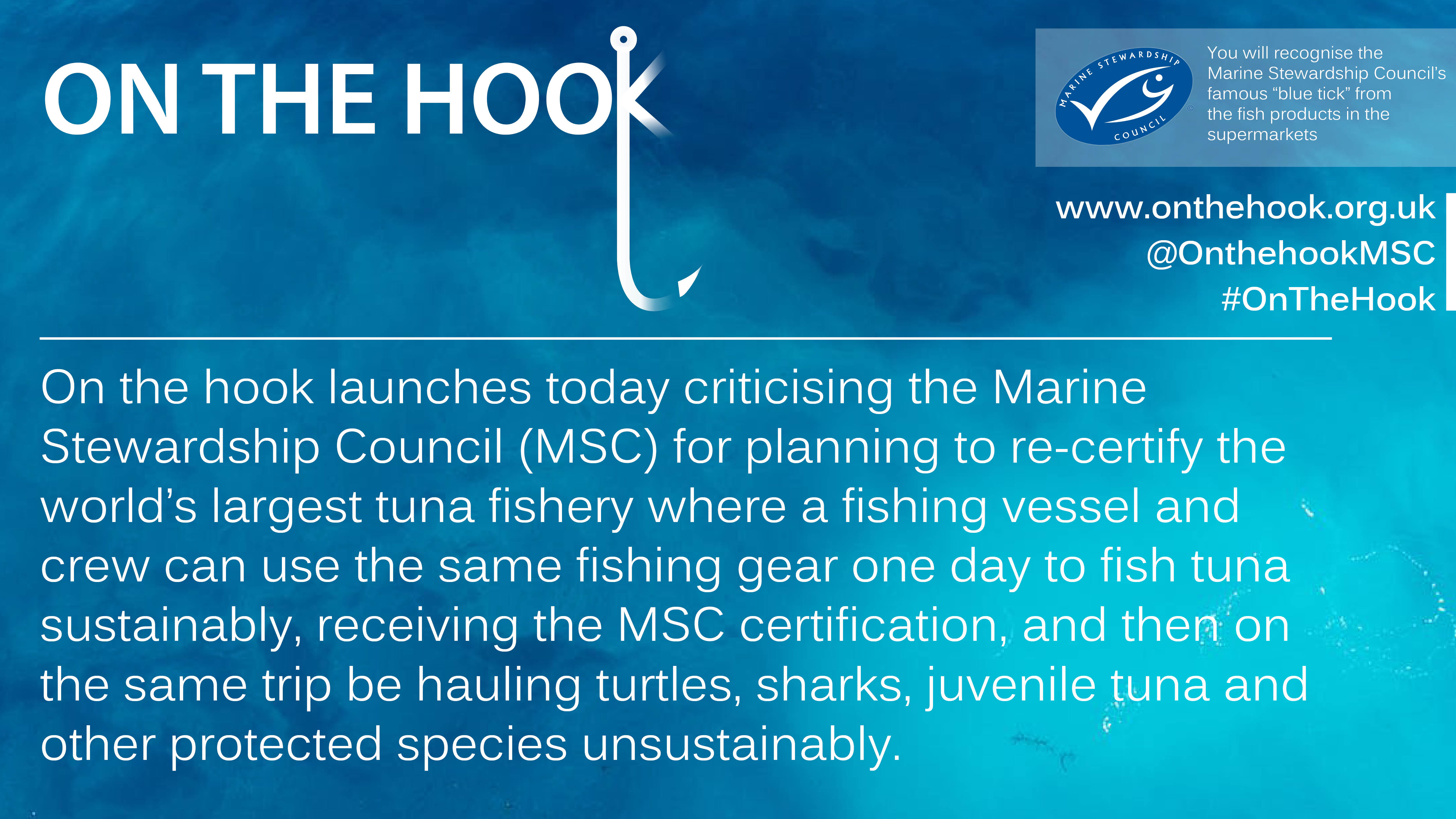 After months of unfruitful exchanges with the MSC, BLOOM and a wide range of stakeholders launched On The Hook, a campaign that aimed to prevent the largest tuna fishery in the world — the PNA fishery — from being re-certified.

The point of contention was simple: the fishery targets two species of tuna (skipjack and yellowfin tuna) using a single gear: a purse seine.[1] During the same trip, this purse seine can be used opportunistically on either ‘free schools’ of tuna — the activity that is MSC-certified ­— or on schools formed around ‘fishing aggregating devices’ (FADs).[2] The latter practice catches many sharks, turtles, juvenile tuna and other protected or sensitive species, rendering it unsustainable.

After a long and hard negotiation, a non-public workshop was finally organized in early June by the MSC with some 40 stakeholders (including BLOOM). Given the poor outcome of this workshop and after having tried to negotiate with the MSC for more than eight months, we decided that it was time to bring this issue of compartmentalization into the spotlight: On The Hook was launched at the end of August 2017.

Shortly afterward, the MSC launched a public consultation in September 2017, which completely missed the point of the On The Hook campaign, preferring to talk about at-sea traceability.

31 August 2017: Citizens against the re-certification of the PNA fishery

A poll conducted by Populus showed that consumers find the current practices of the PNA fishery unacceptable. In the same questionnaire, 69% of the respondents agreed that any MSC-certified fishery must be sustainable as a whole. The survey allows us to conclude that a majority of the persons surveyed would lose confidence in the MSC should the PNA fishery’s certificate be renewed despite the FAD fishing activity. 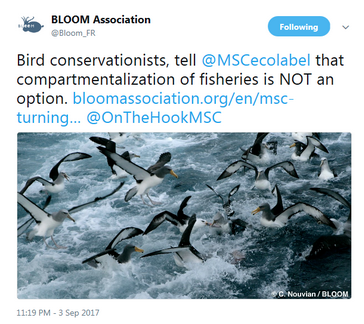 4 September 2017: BLOOM demonstrates that compartmentalization could be extremely damaging to marine conservation

By using longline fisheries as an example, BLOOM shows how allowing the compartmentalization of fisheries in to ‘sustainable’ and ‘non-sustainable’ components could lead to extremely damaging results for seabird populations.

> Read more about this story here

The Dutch Advertising Standards Committee recommended that Princes should stop using a number of statements on its tins, notwithstanding the fact that the wording is prescribed by the MSC under its Ecolabelling Licence Agreement with Princes.  Specifically, the Committee has recommended that Princes remove claims that “This product comes from a fishery that is independently certified according to the MSC standard for a well maintained and sustainable fishery”, as well as its declaration that “Princes collaborates with fishermen that are MSC certified and that are active for sustainable fishery. This tuna is caught responsibly, 100% traceable and MSC certified”.

> Read more about this decision by the Dutch Advertising Standards here

30 September 2017: BLOOM contributes to the MSC consultation on ‘Units of Assessment’

Although none of the options that were offered were adequate as part of the September 2017 MSC consultation on the definition of ‘units of assessment‘, BLOOM submitted a contribution.

Despite increasing public pressure by On The Hook, the audit company in charge of assessing the PNA fishery gives it a passing note.

26 September 2017: the International Pole and Line Foundation files an objection

The International Pole and Line Foundation (IPNLF) opposes the re-certification of the PNA fishery, although this process is increasingly considered by stakeholders as pointless: the ‘independent adjudicator’ supposed to decide whether the objection should result in the suspension of the certificate is… recruited and remunerated by the MSC! In fact, the overwhelming majority of objections do fail.

19 January 2018: MSC toughens its standards… but not too much

Given the results of its public consultation and increasing pressure by On The Hook, the MSC’s board has decided to change the label’s standards by requiring that all fisheries be assessed as a whole, without compartmentalizing the catch starting in August 2018. However, fisheries already under assessment by that time will be given a three-year grace period before having to comply with the new standards. Thus, compartmentalization will be officially allowed and endorsed by MSC until at least the end of 2021!

Even though the MSC has acknowledged that On The Hookvalidates the re-certification of the PNA fishery‘s concerns were justified by changing its standards, the objector dismisses the objection filed by IPNLF. Unsustainable practices will carry on branding themselves as ‘sustainable’ for the next five years.

19 January 2018: The Grocer, “MSC to toughen up rules on sustainable fishing trips“.