BLOOM fights so that political decision-makers and private actors protect the ocean.

The legislative field: the battlefield on which BLOOM wins!

BLOOM calls on public authorities to remind them of their primary mission: the defense of the common good. Our association provides local, national and European policymakers with key scientific data, which is a real help for decision-making in the face of the misinformation promoted by industrial lobbies. We support elected officials through advocacy, amendment proposals and participation in conferences such as the Grenelle de la Mer.

In 2009, the French government organized a reflection process with economic and professional actors, and with civil society representatives concerned with the sea. The objective was to define a national strategy for the sea and the coast. BLOOM and WWF initiated the creation of a platform of NGOs to defend public interests.

Of the 138 commitments of the Grenelle, here are the main victories for the protection of the ocean:

“In most cases, we have the necessary governance tools: laws, legal structures, guidelines for responsible fisheries, ethical charters, all of which already exist and only need to be translated and applied locally. To invoke a lack of legal framework in the same way as invoking a lack of scientific data to justify inaction is no longer acceptable. What is missing is the political will.”
Claire Nouvian, founder of BLOOM. Extract from the speech given to Nicolas Sarkozy and Prince Albert II of Monaco in the Principality of Monaco, April 25, 2008

In order to bring about change, BLOOM meets with elected officials at the European Parliament and the National Assembly to provide them with a perspective supported by scientific arguments grounded in economic, social and environmental data. Our arguments are synthesized in an advocacy document, which is given to the elected officials after meetings. We are sometimes accompanied by artisanal fishers who share our vision. Coalitions between fishers and NGOs are still uncommon. They make it easier to meet with elected officials who are more willing to accept a meeting, and they strengthen our credibility. During the campaign to ban electric fishing, the role of European artisanal fishers was decisive. Their presence in the European Parliament’s corridors made MEPs listen closely.

Drawing on our expertise and knowledge of the field, BLOOM proposes amendments to MPs. Here is the list of our proposals:

BLOOM originated the amendments that ban electric fishing. We submitted them to a group of MEPs who endorsed them.

In April 2020, BLOOM published an open letter asking the government to direct aid to overcome the COVID-19 crisis towards small-scale coastal fishing.

In an open letter dated January 23, 2017, BLOOM joined representatives of 52 other international organizations in calling on MEPs to support the PECH Commission proposal in the Parliament’s vote on February 2. At stake: more transparency regarding European fishing fleet data.

In March 2016, BLOOM sent an open letter to Mr. Vidalies, Secretary of State for Transport, Sea and Fisheries, and to Mr. Gueudar-Delahaye, Director of Maritime Fisheries and Aquaculture about the misinformation spreading on the health of European fish stocks.

CRPMEM Guyane sent an open letter to the French President, co-signed by BLOOM and WWF France to remind the State’s commitments, as well as the alarming economic and ecological consequences of the pressure exerted by illegal foreign fishing in Guyana’s Exculsive Economic Zone.

In January 2017, BLOOM contributed to a book-manifesto previewed to the world’s most powerful leaders at the Davos Economic Forum in Switzerland from January 17 to 20, 2017. It seemed essential to us to attempt to raise awareness and empathy, which are the cornerstones of the book, among the world’s political and economic elite. BLOOM’s text shows that the industrialization of global fisheries has generated impacts that go far beyond marine ecosystems, also affecting our humanity.

Evaluation of public and private practices 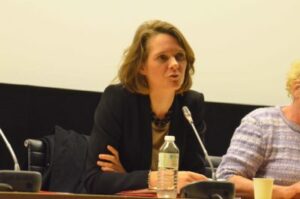 As an effective whistleblower and countervailing force, BLOOM fights to ensure that public policies and finances no longer destroy the ocean and those who depend on it. BLOOM ensures that elected officials and private sector actors respect the law and their commitments.

BLOOM is involved in the legislative field and participates in public consultations. Find here our main contributions classified by theme.

In anticipation of a report on the implementation of the new “Technical Measures” regulation, the European Commission launched a public consultation until February 15, 2021 to ask stakeholders whether this regulation was well implemented and sufficient. As this is the regulation that bans electrofishing in European waters, BLOOM responded by focusing on questions concerning “innovation” and compliance or lack thereof.

France launched a public consultation in anticipation of its program for the next EMFAF (2021-2027) at the European Commission. The EMFAF specified the way in which France intended to use the European credits that it would receive.

BLOOM responded on March 11, 2020 to a public consultation on a draft decree that determined the conditions for recreational bluefin tuna fishing for the year 2020.

The regulation governing deep-sea fishing in Europe, which establishes a ban on trawling beyond a depth of 800 meters, was subject to an evaluation. In this context, a public consultation, in which BLOOM participated, was initiated by the European Commission in 2020.

The Ministry of the Environment, Energy and the Sea launched a consultation, open from August 1, 2016 to August 29, 2016, on a draft order prohibiting deep-sea bottom trawling deeper than 800 meters for fishing vessels flying the French flag.

TRAWLING IN THE COASTAL STRIP

Trolling gear such as trawls are prohibited in the three-mile band. However, there are numerous exemptions. The DIRM-MEMN (Interregional Directorate for the Sea – Eastern Channel – North Sea) launched a public consultation on three draft prefectoral decrees aimed at authorizing, by derogation, trawling in the 1.5-3 mile coastal band for mackerel, cuttlefish, sole and plaice in the Normandy – Eastern Channel region.

In this press release, BLOOM strongly condemns the draft prefectoral decree authorizing pelagic trawling in the Bay of Biscay during the winter period. This activity during the breeding season would seriously jeopardize the preservation of the resource.

On July 29, 2020, BLOOM contributed to a public consultation on the issue of shark “finning”, calling on the MSC label to drastically improve its ambition so as not to further erode its already regularly challenged credibility.

BLOOM responded to a consultation launched by the European Commission on an EU eco-label for aquaculture and fisheries products that closed on 31 July 2015.

Assessment of MEPs and the government

Our representatives in the European Parliament all claim to be defending the ocean, but what are the weight of those words? A few weeks before the 2019 European elections, in order to enlighten citizens on their choice during the European elections, BLOOM ranked French MEPs according to their votes in terms of ocean protection. To do so, the 32 most important votes of French MEPs concerning fisheries and its sustainability were analyzed. We then assigned scores based on the results of this selection.

In 2017, our team compiled a non-exhaustive list of facts to know or remember in order to judge the Macron government’s action on ensuring a sustainable and just transition. We invited citizens to help us complete this list, which intends to serve as our collective memory. For the 2022 presidential elections, BLOOM produced a similar analysis in order to assess the five-year term.

BLOOM does not intend to let the industry act with impunity by deceiving the consumer. Find here our main evaluations and investigations classified by theme.

BLOOM showed that large-scale, high-impact industrial fishing accounted for 83% of MSC-certified volumes between 2009 and 2017 but only 32% of its photographic illustrations over the same period. On the contrary, small-scale, low-impact fishing represented only 7% of the certified volumes between 2009 and 2017 but 47% of the illustrations. The MSC has become a barrier to the transformation of the fishing sector. By instrumentalizing small-scale coastal fishermen in its communications, the MSC greenwashes industrial fishing. In this way the label facilitates, or even maintains, industrial fishing’s access to markets at the very moment when mistrust of industrial production methods is growing.

This study analyzed the supply chain of fish in school catering. It showed that French schoolchildren were, unknowingly, accomplices of overfishing, the extinction of species and the destruction of the marine environment. Indeed, up to 90% of the municipalities served in canteens deep-sea fish, including species in danger of extinction.

In March 2015, BLOOM analyzed 72 skin creams with “squalane” on their labels. This mention does not specify whether this moisturizing substance commonly used in cosmetics comes from animals (shark liver oil) or vegetables (olive or sugar cane). The results are clear for 62 of these creams: one in five contains shark squalane!

The traceability of the fish industry is studied in this unprecedented investigation in France on fish labeling fraud. Conducted in partnership with the NGO Oceana, researchers from INSERM and the National Museum of Natural History as well as the magazine Terra Eco, this study uses DNA tests on nearly 400 samples collected over a year in supermarkets, fish shops, restaurants, ready meals and frozen products to screen the traceability of the fish industry in France. The results show that species substitution in France is rare, with a rate of 3.5%. However, fraud is very high in the case of bluefin tuna.