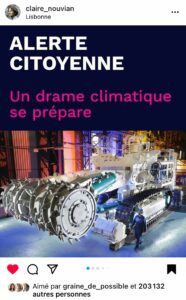 During the UN Ocean Conference’s week (starting June 27th), hundreds of thousands of citizens mobilized alongside us on social networks to ask French President Emmanuel Macron to abandon his destructive project for the ocean and the climate: Deep-Sea Mining.

What is deep-sea mining about ? It is about the industrial exploitation of the deep seabed in order to extract the minerals that go into the composition of various electronic devices and new technologies. To recover these minerals, it is necessary to deploy devastating machines.

Not only would mining, if it were approved by the international community, destroy deep-sea species and ecosystems, but it would also have dramatic consequences on carbon storage, essential for our fight against global warming.

Deep-sea mining is madness from the past.

But thanks to the support of citizens, we managed to put extraordinary pressure on Emmanuel Macron for 24 hours. Hundreds of thousands of French people saw and shared our post, which went viral in a few hours, and millions saw it and discovered Emmanuel Macron’s project to destroy one of the last pristine habitats of the planet.

Our collective mobilization was so successful that we achieved an important victory: Emmanuel Macron made a 180° turnaround and put out the citizen fire mounting against him by announcing in Lisbon that he supported banning mining on the high seas, i.e. in international waters!

This volte-face was still unimaginable the day before.

This amazing result would not have been possible without the long-term extremely rigorous work done by our colleagues from the Deep Sea Conservation Coalition and the sustained mobilization of activists such as Camille Etienne.

This is an important victory!

But we will remain vigilant: why did the French President not make this major announcement during his formal address in the UN plenary session?

Why did he reserve such a momentous decision about the fate of the largest reservoir of life on Earth for a side-event organized at the Lisbon Aquarium?

Why did he not solemnly support the international moratorium on deep-sea mining, as Pacific states such as Fiji, Palau, Samoa and the Solomon Islands did a few days before him?

We know the French president’s environmental marketing method and will closely follow the alignment of words with actions.

BLOOM will remind Mr. Macron of his “Lisbon promise” and that it was citizen mobilization that made this victory possible.