BLOOM and the Varda Group, which have been advocating for the adoption of strong fisheries subsidies disciplines at the WTO 11th Ministerial Conference, are dismayed by the WTO’s failure to agree on a binding agreement.

Since the WTO initiated talks in 1999 on fisheries subsidies that fuel overfishing, overcapacity and illegal fishing worldwide, an international binding agreement to eliminate such harmful subsidies had never been so close. However, within only a few hours of the start of trade talks, a few WTO members had already severely watered down the Draft Ministerial Decision. India gave it a lethal blow.

“The culprit is known: India blocked everything, even an agreement on the elimination of subsidies that drive illegal fishing. This is irresponsible”, said BLOOM’s CEO Claire Nouvian. “It means the Indian government supports the ongoing destruction of the ocean and of artisanal fishers. The collapse of WTO negotiations will inevitably have a boomerang effect on small-scale fishers, not just in India, but around the world.”

The proposed WTO subsidies disciplines were essentially targeting large-scale industrial fisheries and everyone agreed that special and differential treatment was needed for small-scale fisheries in developing countries. “This new impasse of the WTO seriously brings the credibility of the institution into question, yet again”, said Rémi Parmentier, Director of the Varda Group. “At the UN, Heads of State and Government had agreed to eliminate harmful fisheries subsidies by 2020 (SDG 14.6), but at the WTO, where decisions are legally binding, their Trade Ministers ignored this clear mandate. Hypocrisy is reaching new heights.”

On the positive side, 164 Member countries have agreed to conclude by the next WTO Ministerial Conference in 2019 “an agreement on comprehensive and effective disciplines that prohibit certain forms of fisheries subsidies that contribute to overcapacity and overfishing, and eliminate subsidies that contribute to IUU fishing recognizing that appropriate and effective special and differential treatment for developing and least developed members should be an integral part of these negotiations”.

In his closing address, WTO Director General Roberto Azevêdo said that a “leap” was necessary to bridge gaps between Members’ positions and he was disappointed it had not occurred in Buenos Aires despite the clear mandate to implement SDG 14.6.

BLOOM and Varda call on WTO members to keep the negotiating momentum and to work towards reaching a fisheries subsidies agreement by the end of 2018, not 2019. 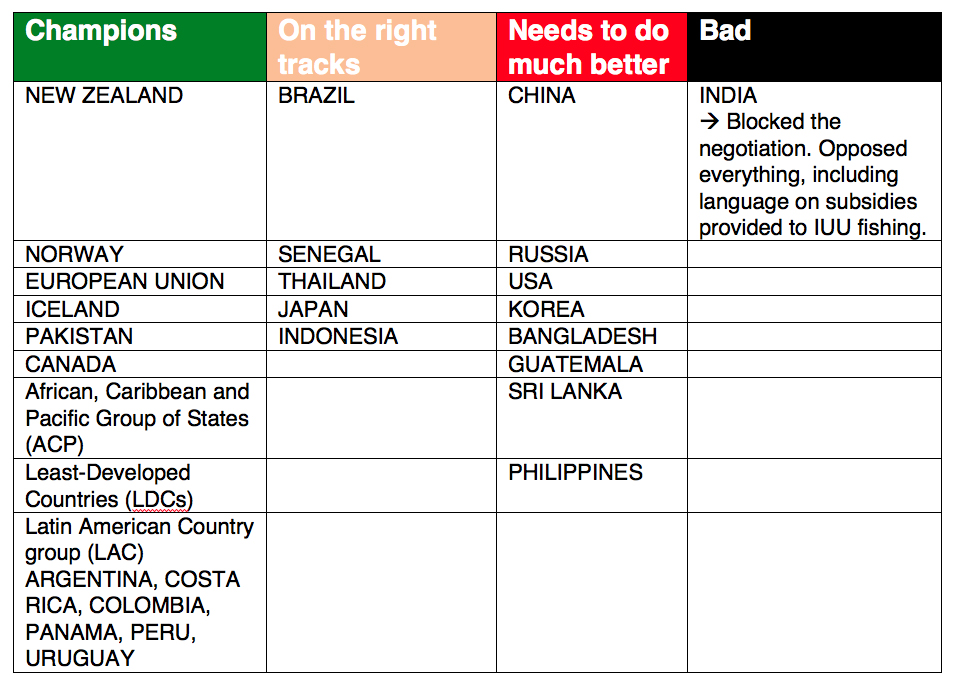