ICES Scientists on political mission to save electric fishing

MUCH ADO ABOUT NOTHING…

Pressed by Dutch politicians, scientists from ICES produced partial advice to try to avoid EU-wide prohibition of electric fishing. Nothing new in their report but plenty cherry-picking of data to advocate that electric fishing is ‘sustainable’. European science obviously needs a check and balance process to avoid being so grossly instrumentalized to political ends.

This absurd question — equivalent to asking “is plague better than cholera?” — gave the opportunity to the Dutch fishing industry and its lobbyists, which include prominent Dutch politicians, to conclude that electric trawling was sustainable. 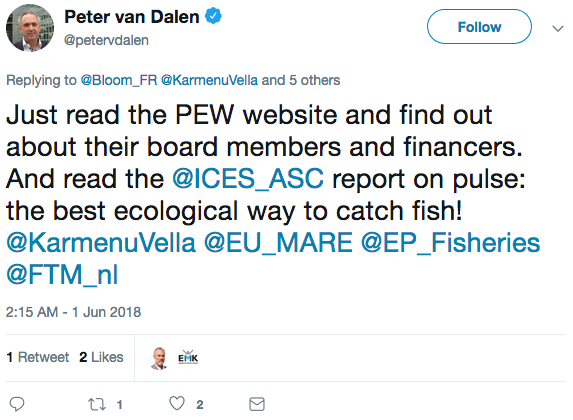 Such statements would provoke hilarity if they did not have serious implications on EU politics and on the fate of electric fishing and traditional fishers of Europe, but Trilogue negotiations on the Technical Measures Regulation could well come to an end before the summer. The opportunity that an “established” scientific body offers electric fishing defenders to make outrageously false claims is not acceptable from European science.

As the platform of French small-scale fishers argued (read their Facebook post): “How can a scientific body, which is supposed to be ‘independent’, answer such a biased request?” The French members of ‘LIFE’ (Low Impact Fishers of Europe) denounce that ICES has followed the Dutch fishing industry’s strategy, i.e. to exclusively compare electric trawling to beam trawling, although it is “one of the worst fishing gears in the world“.

Mrs Carola Schouten, for example, the Dutch Minister for agriculture and fisheries, noted that “[The Trilogue negotiation] is not a simple process, but the conclusions of this renowned international organization make our case stronger“. Mrs Schouten obviously wants to avoid being seen as politically responsible for the disastrous electric fishing file, which spans 1) illegal licenses, 2) fake scientific activities to disguise commercial operations and 3) substantial public subsidies provided for science which has never been done, as she, herself, publicly acknowledged just a few weeks ago. Indeed Mrs Schouten admitted that there had been no research protocol in place between 2007 and 2017.

But guess what? This never-done research is supposed to have fed the ‘new’ ICES advice today…

In this context of ‘undone’ science, it is not surprising that the ICES response to the Netherlands brings nothing new to the debate. Scientists who have written this so-called ‘scientific’ response have not unveiled new data on fundamental questions such as the social impacts of electric fishing on other fishers, on the effects of electricity on eggs, juveniles and invertebrates or on the long-term effects of using electricity in marine ecosystems. Let alone critical questions such as: how economically viable can such an efficient fishing technique be to its very proponents? Having access to the detailed financial situation of electric fishing companies would probably shed harsh, unforgiving light on their performance over time.

BLOOM would therefore like to know which scientists have dared produce such a gross attempt to support electric fishing at the cost of their scientific credibility. We have sent a formal request to ICES to that effect that you can read here.

> Please, also take the time to read our in-depth scientific analysis of the ICES advice

In 2006, when Dutch industry lobbyists and politicians obtained from the European Commission that it would lift the prohibition to use electric current, as a tailor-made measure for them, they again missed the opportunity to question the unprofitable business model of beam trawl fleets, to reduce fishing capacity and to switch to more virtuous fishing gear.

Today, the Dutch electric fishing lobby is again attempting a ‘tour de force’ at a crucially important time of EU negotiations (the so-called ‘Trilogue’) to keep their businesses afloat thanks to the use of electricity and abundant (albeit concealed) subsidies.

But marine ecosystems, EU citizens and sustainable traditional fishers should not and can no longer pay the price of the Dutch fishing industry’s stubbornness.

The fishing industry obviously suffers from a ‘Titanic Syndrome’, i.e. the faith that companies engaged on the frontiers of new technologies have that they have covered the key risks… But they have not.[2]

This means that the Dutch fishing industry may well be sawing the branch on which it is sitting.

Yet again though, their intricate links with politicians could steer public decision-making at the opposite of the general interest.

It is not the role of European science to act under the direct influence of the fishing industry and politicians to avoid questioning a fishing model which is simply no longer acceptable or viable.

Citizens are entitled to expect more integrity and independence from European science and political institutions.

[1] On its website, ICES is described as “a global organization that develops science and advice to support the sustainable use of the oceans. It is a network of more than 5,000 scientists from over 690 marine institutes in 20 member countries“.
[2] Definition of the ‘Titanic Syndrome’ by the Huff Post.